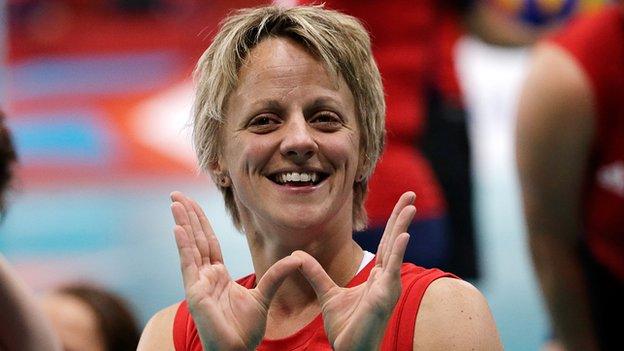 Everyone has performed fantastically well and these are stunning results

There were silvers for Dan Hopwood and Ian Marsden while Robert Oliver took bronze in his category.

The Europeans are a key part of preparations for the World Championships in Germany in late August as the sport prepares to make its Paralympic Games debut in Rio in 2016.

The Paralympic races, which are held over 200m, feature two types of boats - kayaks and outrigger canoes, also known as Va'a.

Wiggs, who raced in the Trunk and Arms category in the kayak event, put in a powerful display to claim a comfortable win.

Fellow kayaker Dickins, who came to the sport after a chance meeting with the GB coach at the London 2012 Olympics where they were both working as Gamesmakers, was equally dominant in the Legs, Trunk and Arms category.

Tweedy, who took up the sport last year, made his mark in the Leg, Trunk and Arms category for the Va'a.

Programme manager Steve Harris was full of praise for the squad: "Everyone has performed fantastically well and these are stunning results.

"Our programme has gone from strength to strength since we have benefited from UK Sport Lottery funding.

"We have been able to employ coaches to work with the squad and buy the necessary equipment as well as provide sports science support.

"We very much hope this will continue and allow us to develop further as we prepare for Rio."