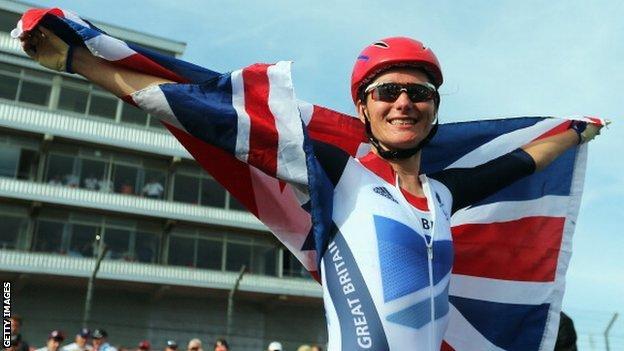 Dame Sarah Storey has withdrawn from the Para-cycling Road World Championships as she recuperates from the birth of her daughter last month.

The 11-time Paralympic gold medallist was named in a four-person Great Britain team for the event in Quebec, Canada, starting on 29 August.

But she said: "My decision was an easy one as Louisa was born by emergency caesarean section and the post-operative rehab takes place over a 12-week period, including the Road Worlds and most of September."

The 35-year-old, who won world C5 Time Trial and Road Race gold in Denmark two years ago, hopes to return before the start of 2014.

Sarah Storey won five Paralympic gold medals as a swimmer before switching to cycling. Her 11 gold medals are a joint British record with Tanni Grey-Thompson.

"I will be back on my bike after an initial six-week rest period and gradually building up to a normal training load with a view to possibly competing on the track before the end of the year," she explained.

Storey, winner of four gold medals at London 2012, was training for up to three-and-a-half hours per day during her pregnancy and said in April that she wanted to defend her two world titles.

Both Paul Radcliffe and Baroness Tanni Grey-Thompson made speedy returns from childbirth to win big-city marathon races, while American Kristin Armstrong won the women's time trial at London 2012 two years after becoming a mother for the first time.

"We hope Sarah enjoys some quality family time, and we look forward to having her back in full-time training and racing as soon as she's ready."

Great Britain have until 7 August to submit their final team, with Lora Turnham, who won gold in the road race and time trial at the World Cup in Segovia earlier this year, along with her pilot Corinne Hall included.