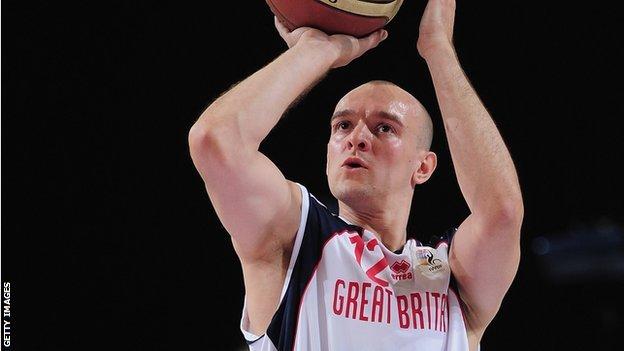 They will meet Turkey in Frankfurt on Sunday, after the Turks beat Sweden 79-45 in the other semi-final.

Simon Munn, who top-scored for the defending champions with 21 points, said: "I'm not going to be happy unless I go home with gold."

GB women may not have been able to break the monopoly of Germany and the Netherlands but this bronze is a considerable achievement given that coaches Joe Jayaratne and Nigel Smith were only appointed in April. This young and developing squad also showed glimpses of what they could achieve, if they can perform over 40 minutes because they boast strength in depth they haven't had until now.

The British men's team, who won gold in Israel two years ago, had been trailing 69-67 with just one minute and 18 seconds to go.

But an Abdi Jama lay-up and three late free-throws from Ian Sagar gave them a three-point advantage.

Spain had a chance to take the game into overtime but Pablo Zarzuela missed with his three-point effort.

Head coach Haj Bhania said: "I'm just really pleased to be in the final. Spain gave us a game. We knew they were going to be tough opponents.

"We were in control of the game in the first half but silly mistakes cost us a little.

"The guys just played with guts and for each other and we said at the beginning that team-work will do it."

Amy Conroy was the star for GB women, scoring 27 points, with Judith Hamer next with seven.

Women's head coach Joe Jayaratne said: "All the players we put on court stepped up and we got the job done. We are very happy as a team to have won bronze.

"Our number one aim was to make sure this team qualified for the World Championships - once that had been achieved we'd have been disappointed not to get bronze."