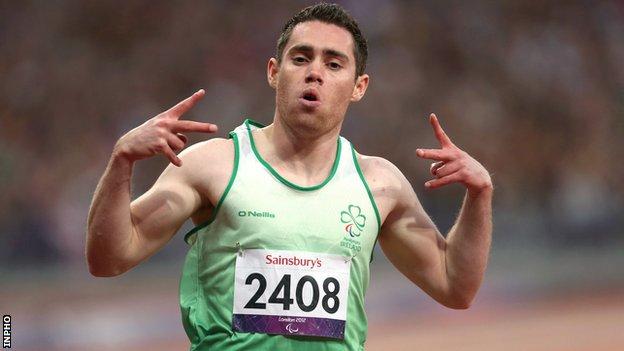 Jason Smyth progressed into Sunday's T13 200 metres final at the IPC World Championships as he comfortably won his semi-final in Lyon on Saturday.

Smyth, the first Irish athlete in action at the championships, eased to victory in 21.57 seconds.

Four-time Paralympics gold medallist Smyth will be an overwhelming favourite in Sunday's final at 16:23 BST.

Michael McKillop will be expected to pick up gold on Sunday as he defends his 800m T37 title.

Smyth is aiming to regain the 200m title after missing the 2011 championships in New Zealand.

The Derryman's time on Saturday, as he eased down in the closing 80 metres, was .52secs outside his world record for the event set at last year's London Paralympics.

Smyth finished over a second ahead of Mexico's Benjamin Gonzalez in the heat but he will face tougher opposition in Sunday's final with Namibia's Nambala Johannes having clocked an African record of 21.80 in the second semi-final.

But Smyth will still go in as a strong favourite given that he has a lifetime's best of 20.94 set in an able-bodied race in 2010.

Glengormley athlete McKillop set a world record on the way to winning the event in Christchurch in January 2011 and like Smyth, will be an overwhelming favourite going into his opening event.

The 800m will be run as a straight final just over an hour before Smyth's appearance in the T13 200m final.

The two northerners will then have a couple of days off before aiming to complete doubles in France.

Smyth will be in action in the T13 100m heats on Wednesday morning with the final scheduled for Thursday evening.

Once again, McKillop will not be required to run heats in the 1500m with the T38 final scheduled for Wednesday afternoon.

McKillop set a world record when winning the 1500m in Christchurch but he was not awarded a gold medal because of the lack of entries in the event.

Despite his dominance in Paralympic competition, sprinter Smyth insists he is "fully focused" going into the Lyon championships.

"You are there to do a job so it's all about knuckling down," Smyth told BBC Sport.

"Also, I missed the championships in 2011 because of injury so that gives me a bit of incentive to get back and win the titles."

Smyth started the summer with hopes of claiming a place in the mainstream World Championships in Moscow in August.

However, the Northern Irishman accepts that his chances of now competing in Russia are "slim" after a somewhat disappointing series of races.

"I don't feel that I really have put a race together this season but the bottom line is that Paralympic competition is where I need to perform at."

In the build-up to the championships, Smyth has also had to digest the news that his regular training partner and friend Tyson Gay failed a drugs test in the US.

The Londonderry athlete has been reluctant to say too much following last weekend's revelation as he attempts to focus on his Lyon campaign.