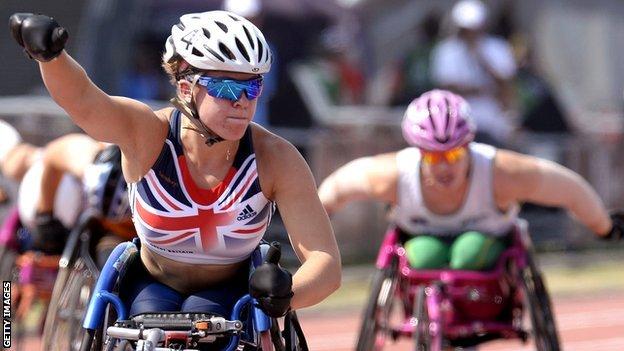 Britain's Hannah Cockroft secured the sprint double after a typically emphatic win in the T34 100m at the IPC World Athletics Championships in Lyon.

Cockroft won in a new championship record of 17.88 seconds with Amy Siemons second in 19.15.

"The double is what I came out here to do and it shows I'm still number one," the wheelchair racer told BBC Sport.

But amputee sprinter Jonnie Peacock's hopes of adding the world title to his Paralympic crown took a dent after American rival Richard Browne grabbed his world record in the T44 100m semi-finals ahead of Tuesday evening's final.

Peacock won the first semi-final in 10.87 seconds - just short of the 10.85 he ran in Indianapolis last year but moments later Brown ran a superb 10.83 to take the record and set up a mouth-watering clash.

"I felt great coming out of the blocks and I'll be ready for the final on Tuesday," said Browne afterwards. "I know Jonnie has more left in the tank for the final - so do I - and the final will be a great race."

But there were no such problems for Peacock's fellow London gold medallist Richard Whitehead who eased into the final of the T42 200m in a new championship record of 24.49.

Cockroft had looked in superb form in winning Saturday's 200m and she looked as strong over the shorter distance.

The 20-year-old double Paralympic gold medallist from Yorkshire was quickly into her racing and by the halfway point she was well clear of her rivals.

"It's not a very fast track and I did have a couple of issues keeping my wheels on the ground" she added. "But the pressure was on because people want to see the gold medals and that's what I've got.

"Everyone is expecting me to go out and win each time and that is a challenge but I want to win every race that I can enter."

Blake, 23, led from start to finish to beat Russian rival Artem Arefyev in a new personal best of two minutes 6.10 seconds - just over two seconds clear of the Russian.

"I've put in so much hard work over the last couple of years and it feels like it has finally paid off," he told BBC Sport.

The searing heat in France took its toll on the Briton, who needed lengthy treatment to help him cool down and recover after the race.

"There was so much hype around the clash between Jonnie and Richard Browne and both of them have certainly brought their game to these championships. It will have been hard for Jonnie to have run a good race but then to have his world record taken away from him. It's difficult to know if both gave everything in the semi-finals and we probably won't find that out until they are racing beside each other on Tuesday. I would love to be a fly on the wall in the call room before the final to see how the gamesmanship plays out."

"My aim was always to try to go out hard over the first lap and then try to hold on for the second 400m," he added. "I knew I had the strength in me but it was just a matter of holding my form.

"I could hear the Russian coming behind me but I managed to keep my cool and I was so relieved and happy when I crossed the line."

Arnold, who is a training partner of Aled Davies and Josie Peason, who both won gold earlier in Lyon, managed a new personal best of 37.45 to win her javelin competition.

"I've been struggling for a few months with glandular fever so I rested well and came out strongly," said the 19-year-old. "I wasn't expecting to do that well but a lot of hard training and help has got me here.

"I was coming out here to get a PB and maybe win a minor medal but as the competition went on I realised I could win gold."

Hahn, 16, a keen horsewoman who only started athletics six months ago, was thrilled to win a silver medal on her major championship debut.

"I really enjoyed it out there. I got a good start and slowed down and the Brazilian girl slipped past me," she said.

"It still feels like a dream to me and I didn't expect to run as quickly as I have done and I surprised myself by setting a new championship record in the heats on Sunday."

Woodward held off the challenge of Namibia's Paralympic champion Johanna Benson in her race but was unable to get past home favourite Mandy Francois-Elie.

"It was a fast race and so close between myself and Johanna but I'm really glad to have come out on top," she said.