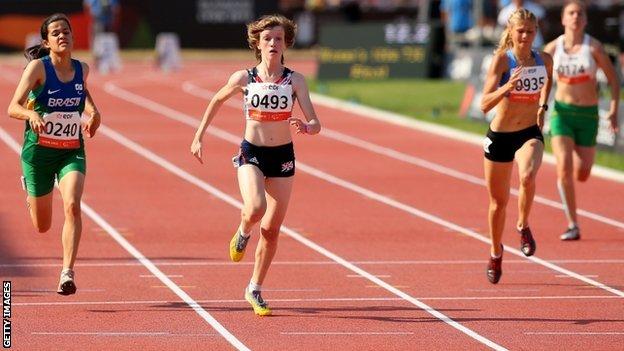 Teenager Sophie Hahn announced her arrival on the world stage with a record-breaking victory in the T38 100m to win Great Britain's 10th gold at the IPC World Athletics Championships.

The 16-year-old from Nottingham, who has cerebral palsy, only became involved in athletics earlier this year and is competing in her first major championship.

After winning silver in Monday's 200m, she went one better over the shorter distance, winning in 13.10 seconds - 0.09 seconds faster than the world record.

Hahn was one of four GB medallists on Wednesday, with Libby Clegg winning her second silver of the week and Josie Pearson and Lee Whiteley winning bronze in the club throw and T38 200m respectively.

British Athletics have got a real find in Sophie Hahn and her win was amazing and great for the rest of the team to see youngsters coming through. After her silver medal in the 200m, it was hard to know how the pressure and excitement would translate into the shorter distance. But she didn't panic or get stressed out and ran straight through the line. In her interviews afterwards she came across as a very mature 16-year-old but I don't think she realises what she has done in winning a world title. The next couple of years will be about teaching her how to use starting blocks, which can be challenging for someone with cerebral palsy but if they work for her, she could go much much quicker.

Hahn's rivalry with Brazilian 17-year-old Veronika Hipolito, who won the 200m and was second in the 100m, will be one to watch in the build-up to Rio 2016. The Briton, who races from a standing start, admits she still has plenty to learn.

"I just blanked everyone and everything else out and tried to pretend I was at a training session. I've surprised myself."

Hahn has had a dramatic rise since starting at Charnwood AC, along with her brother, earlier this year.

The horse-mad teenager, who recently sat her GCSEs and will be starting a course in equine management in Melton Mowbray in September, admitted that she cannot wait to get home and catch up with her friends.

There was disappointment for fellow Briton Clegg, who had to be content with second in the T12 100m.

Clegg, who won the 200m silver earlier in the week. was the defending world champion but her time of 12.23 seconds was beaten by Chinese rival Guohua Zhou, who also won gold in London last year.

"I'm happy with my performance but gutted with the result and losing my world title, but we will just come back stronger next year," said Clegg.

"I definitely think the Chinese girl is beatable, but she was stronger today. My guide Mikail Huggins and I have a few things we want to change in training so hopefully we will come back next year much stronger."

Whiteley, from Sale in Cheshire, finished fourth in the T38 100m but clinched a bronze behind Australian star Evan O'Hanlon in the 200m.

The 24-year-old, a former able-bodied runner, has battled back from a brain infection which damaged his nervous system and led to reduced function in his nerve endings.

"Two years ago, I was in a hospital bed being told I might never walk again, but I just believed in myself and had great support and here I am," he said.

"It's all a bit of a shock and a whirlwind. I knew I was capable of winning a medal but until it actually happens you don't really believe it."

Pearson was also delighted after achieving a personal best of 14.01 in the F31/51/52 club throw, with team-mate Gemma Prescott in eighth.

It was Pearson's second medal after winning the discus on Sunday despite a protest by the US team.

"After the protest, I had such an awful time thinking I was going to lose the medal," she said. "I knew I was the best athlete and had won fair and square and that made me determined to go out and set a personal best in the club. I did that."