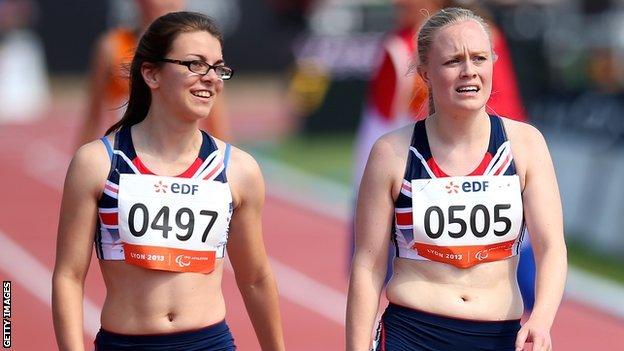 Teenager Sophie Kamlish edged out team-mate Laura Sugar to win bronze in the T44 200m on the final day of track action at the IPC World Championships.

The 16-year-old finished in a new personal best of 28.71 seconds - 0.17 seconds ahead of major championship debutant Sugar, who also managed a PB.

Gold went to Marlou van Rhijn of the Netherlands, who also won the 100m, while Marie-Amelie Le Fur took silver.

"The 200m isn't my favourite event so it's amazing to have been able to win a medal in it," Kamlish, who comes from Bath, told BBC Sport.

"I haven't had a brilliant season in the event and hadn't manage to get under 30 seconds so my plan was to start slower than I normally do and try to conserve energy for the second half of the race."

After just missing out on bronze in the 100m after being passed late on by veteran American April Holmes, Kamlish admitted the disappointment of that helped her over the longer distance.

"Coming so close in the 100m, which is my favourite event, gave me the drive to carry on," she said.

"I wasn't sure whether I had won a medal when I crossed the line. I wear glasses and my peripheral vision is fairly bad but I knew I was in with a chance and I was so relieved when it was confirmed.

"In London I was sixth in the 200m so it's a massive improvement. Competing there and the lessons I learned have really helped me here."

Kamlish, who was taught PE at Oldfields School in Bath by Olympic gold medal winning rower Helen Glover, will return to school in September to complete her A level studies.

But the keen artist is also known for the coloured flower she wears in her hair each time she races.

"I wore the flower at the Paralympics and got a bit of attention for it so I decided to carry it on this year," she explained. "It's nice to have a trademark rather than just the running blade and glasses to help people recognise me."

Sugar, who has played hockey for Wales, was also pleased with her fourth place, but knows she has the ability to go faster.

"That was only my fifth-ever 200m race so you learn something new each time and apply it to the next race so I'm confident I can improve my times and keep improving," she said.

McBride was the last GB athlete to compete on the track, with only Shelly Woods to go in Sunday's marathon, but the wait was worthwhile for the GCSE student at St Edward's College in Liverpool as she set a new personal best of 1:01.28.

"I'm thrilled to be representing GB at my age and to have won a medal to add to the team total," she said.

"It was a hard race but I will learn from it and train hard. I wanted to start out hard but the final 100m killed me.

"A lot of people from the team have come along to support me and I've had so much encouragement from my school, my family, my coach and training partners and I'm delighted to bring them back a medal."

British Athletics head Paralympic coach Paula Dunn was full of praise for her squad's displays in Lyon after they surpassed their pre-event target of 25 medals.

"I've been so pleased with the way the team has performed," she told BBC Sport.

"We've had lots of season's bests and personal bests. Everyone stepped it up from day one and they have done their team and country proud.

"It was important for the likes of Hannah Cockroft, Aled Davies, Josie Pearson and Richard Whitehead, who all won gold last year, to deliver again and they did.

"If the stars on your team deliver then it is gives great strength to the rest of your team. We've had great momentum and been on a real roll here.

"I knew how good teenagers like Sophie Hahn and Scott Jones were but they have surpassed what I expected and I am very proud of them for coming to this environment against the best in the world and holding their own.

"I thought we could make the target of 25 but 11 golds is just a bonus. I thought if everyone went well we could get eight or nine so 11 is fantastic."

"I can't believe I have done 12 races in six events here - it is pretty insane," she said afterwards.

"It's amazing and now I can think about all of my accomplishments. It has been a great competition - tough but so exciting."