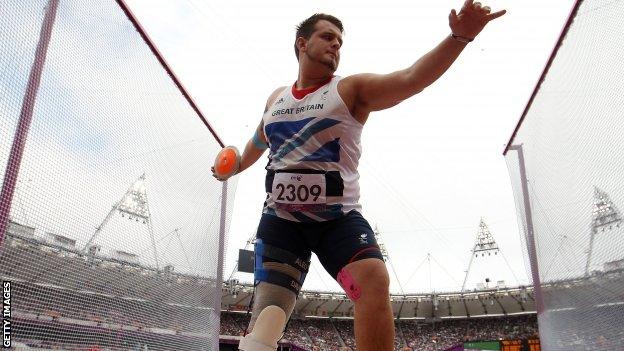 British Paralympic gold medal winner Aled Davies says he is "devastated" he will not have the chance to defend his F42 discus title in Rio in 2016.

The International Paralympic Committee announced there will be 177 para-athletics events in 2016, an increase from 170 in London, but added "some have been added and some taken away".

"I was devastated to find out the discus wasn't included," the 22-year-old Davies told BBC Radio 5 live.

"I hope the IPC revise the decision."

The Welshman recently made it a Paralympic and World double with gold in Lyon, where he also picked up the shot put title.

Davies won bronze in the shot put in London and said he would now focus on winning gold in that event in three years' time.

"I'm lucky that I still have one event," he added.

"There are other athletes who don't have any events at all. I'll be going for gold in the shot, but it's devastating I won't be able to defend my Paralympic discus title."

The IPC said the split of para-athletics events would be 95 for men and 82 for women - a 22% increase in the number of medal events for women from London 2012.

The number of medal events for athletes with high-support needs will also increase by 22%, from 45 to 55.

Yorkshire's Hannah Cockcroft, who added the World sprint-double to her Paralympic double last week, will not be able to defend her T34 200m title after it was taken off the schedule and replaced by the 800m.

There was more positive news for Northumberland's Stephen Miller, who has won three Paralympic golds in the F32/F51 club, but missed out on a medal in London.

His event has become a single class which means it will be judged on the distance thrown rather than the coefficient points-based system.

"We can't have a million events, so it's sad that some events have gone - it is strange that some strong events have been dropped.

"Single class is definitely the way to go if we want consistently fair competitions and clear development pathways."