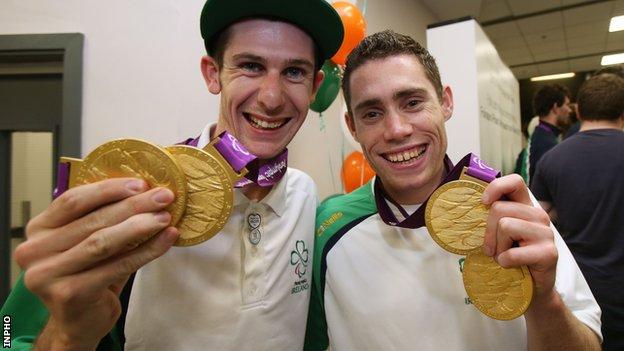 Ireland's double gold medallists Jason Smyth and Michael McKillop will be able to defend just one of their two Paralympic titles in Rio in 2016.

Visually-impaired Smyth, from Eglinton, won the 100 and 200 metres in the T13 class at London last year, but the 200 has been dropped for the Rio Games.

McKillop, from Glengormley, who has a mild form of cerebral palsy, will only be able to defend his 1500m crown.

"I'm really sad and very disappointed as I wanted to go to Rio and defend both my titles. It doesn't make sense to me," said McKillop.

"I want to win as many medals as possible and the news won't stop me from training hard and trying to win the 1500m."

He would have been going for a hat-trick of 800m Paralympic golds as he also won the event in Beijing in 2008.

Smyth, who hopes to qualify for the Olympics as well as Paralympics, has been denied the chance for a third 200m gold medal but can chase a hat-trick in the 100.

"Sometimes things happen that you just don't understand why," said Smyth on Twitter.

Meanwhile, Ballykelly's Sally Brown, who competes for Team GB, has also seen one of her two events removed from the 2016 schedule.

The announcement of the athletics events for Rio - 177 events, seven more than London 2012 and a 22 per cent increase in the number of events for women - was two years in the making after widespread consultation.

The aim of IPC Athletics was for a better spectrum of events to be offered within the programme (short, middle distance and long distance running events, jumps and throwing events) and some events were casualties of the restructuring.