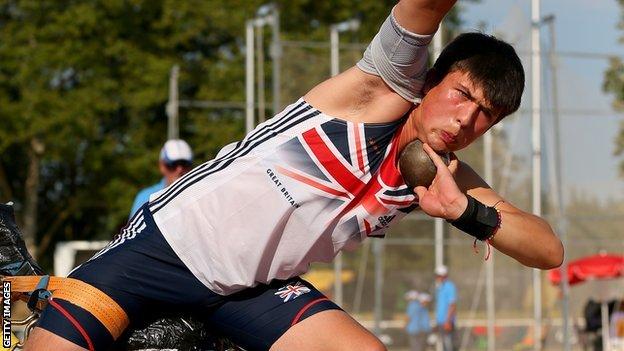 World champion shot putter Scott Jones says missing out on London 2012 has made him even more determined to compete at the Rio 2016 Paralympics.

The 15-year-old from Cheltenham was left out of Great Britain's squad for last year's Games because of his age.

He is now a world record holder and gold medallist following his F34 success at the IPC World Championships.

"I couldn't qualify for London so it made me more determined," Jones told BBC Gloucestershire.

The doctor didn't say I could never play sport again, he just said I might find it hard. So I thought: 'I'm going to play sport just to prove you wrong'.

"Being on the team this year boosted my confidence and winning a gold medal really helps my chances. It proves that I'm progressing.

"I'm old enough, I want to be good enough and I've said to myself 'I will be on that team'."

Competing last week in his first major event, the teenager claimed Britain's 11th gold of the World Championships after throwing 13.38m on his fifth attempt, beating Russian Alexander El'min by 59cm and surpassing the previous world record by 28cm.

"It still hasn't sunk in and I didn't feel right holding the medal as I didn't think I'd win at all," added Jones.

"That night, when I went on to the internet to watch my throws, I found myself on Sky Sports, Channel 4, BBC News, the radio - I didn't expect any of that."

Jones was a keen rugby player and competed in able-bodied athletics until three years ago, when he suffered a stroke that did irreparable nerve damage to the right hand side of his body.

He learnt to become left-handed and started competing in non-contact sports at school, progressing in shot put and securing a place on the British Athletics Parallel Success programme.

Earlier this year, he suffered another stroke and now competes from a wheelchair.

"I was told I would never play rugby again," he recalled.

"I didn't really believe them for the first couple of months, because I wanted to do it.

"The doctor didn't say I could never play sport again, he just said I might find it hard. So I thought: 'I'm going to play sport just to prove you wrong'.

"I was allowed to join in athletics so they let me have a discus, javelin and shot put so I could do sports that I could enjoy.

"I decided I just wanted to do athletics and progress - and now I'm world champion."

Jones is due to take his GCSEs next year and is already thinking about his career beyond competing.

"I need a back-up plan as I'm not going to be a world champion for the next 60 years," he added.

"I'd like to be a sports teacher. I enjoy sport and I want to inspire others in any sport."