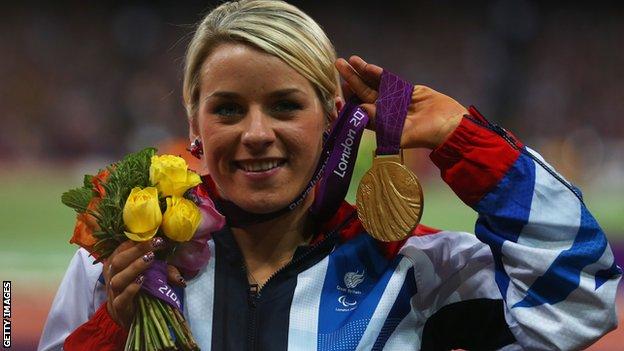 Josie Pearson is dismayed that she will not be able to defend her Paralympic gold at Rio 2016 because of a change in classification of her discus event.

Pearson won the F51/52/53 competition in London but the points system will no longer be used in Brazil.

"They're saying I can compete with the more functionally able class above me, but there will be no points system," she told BBC Hereford & Worcester.

"It'd be completely pointless as I'd never be able to win."

The Hay-on-Wye-based athlete, whose event used points to ensure that athletes with lesser impairments do not have an unfair advantage, continued: "I was absolutely gutted because it's my main event.

F51 - Weakness in shoulder function and the ability to bend but not straighten the elbow joint. No trunk or leg function or movement in the fingers but can bend the wrists backwards but not forwards

F52 - Good shoulder, elbow and wrist function but poor to normal finger flexion and extension. No trunk or leg function

"At the moment I'm never going to be able to defend my title, break more world records or become Paralympic champion again."

The Bristol-born 27-year-old, who trains in Hereford, won gold at the IPC World Championships earlier this month, breaking the world record she set in London of 6.58m with a throw of 7.09m.

But in Rio, the closest event to the title she holds will be the F51/52 discus and Pearson will be competing against athletes that are able to throw over 12m.

Pearson says that she will try and reverse the decision made by the International Paralympic Committee.

"A couple of my colleagues are in the same position so I'll be speaking to my coach and we'll be doing all we can to resolve this," she added.

"The IPC are quite firm in that this is the decision they've made that they won't budge.

"It's not just athletes in this country who have been affected. They've changed a lot of events through field and track.

"It just seems ridiculous. In my classification they put in a 100m but there's only one girl who's posted a time in the last four years.

"Why are they putting in an event that nobody does when they've got a discuss event that has a good deal of girls who do it?"