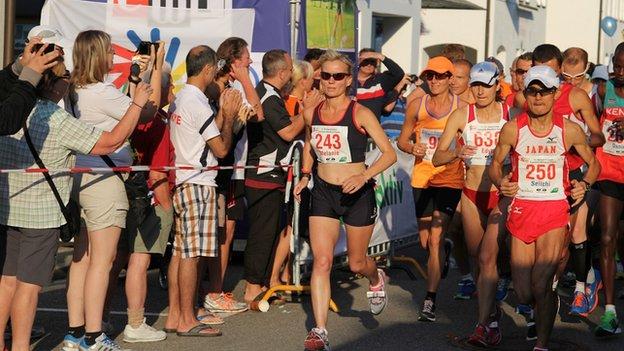 Great Britain enjoyed a late surge to claim five medals at the 2013 Deaflympics in Sofia.

Cyclist Tom Smith, a former GB junior before a back injury hampered his progress, won silver in the road race and bronze in the points race.

In the athletics events, Lauren Peffers landed silver in the 400m while Mel Jewett took bronze in the marathon.

There was also bronze for the women's football team after a penalty shootout win over Poland.

It left the 49-strong GB team in 33rd place in the overall medal table.

The event, originally known as the World Games for the Deaf, was first held in Paris in 1924 and now includes almost 5,000 competitors from 66 countries.

Smith found Russia's Ivan Makarov just too strong in the sprint finish at the end of the road race after the Welshman had battled back to rejoin the leading group with a kilometre left to race.

But he battled hard against Makarov and the Russian's team-mate Dmitry Rozanov to secure a second medal in Saturday's points race, won in convincing style by American John Klish (105) with Rozanov and Smith both finishing on 28 points, one ahead of Makarov.

Peffers, who won medals at the 2005 and 2009 Games, battled against a foot injury to finish second in her final.

"When I got off to a great start, I felt sharp pains," she said afterwards. "So I just went for it. I ran around in the fastest time possible to overcome the injury."

Jewett was the first GB medallist after her third place in the marathon, which was held in Germany in advance of the Games.

And the women's footballers made up for the disappointment of losing in the bronze play-off at the last Games in 2009 with a nerve-wracking win after the sides were tied at 1-1 after extra time.