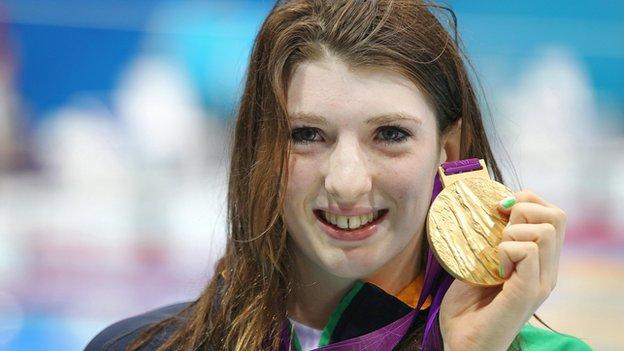 London Paralympics gold medallist Bethany Firth will be part of a six-strong Ireland team which competes at the IPC World Championships next week.

Seaforde swimmer Firth, 17, will be in action in three events at the championships in Montreal.

Rostrevor man Laurence McGivern will swim in the 100m backstroke in Canada.

McGivern, who finished eighth in the event at last year's Paralympics, will be in action in his individual event on the final day of the Championships which take place from 12-19 August.

In addition to the 100m backstroke, Firth will compete in the 200m freestyle and 100m breaststroke events in Montreal.

She will open her championship challenge in the 200m freestyle on Monday and then will swim in her 100m backstroke and 100m breaststroke events on Wednesday and Friday respectively.

Firth will be joined in the Ireland team by another London Paralympics gold medallist Darragh McDonald.

McDonald will swim his London gold medal event the 400m freestyle as well as the 50m and 100m freestyle.

The other members of the Irish team are Ellen Keane, James Scully and Jonathan McGrath.

McGivern, McDonald, Scully and McGrath will also compete in the 4x100m freestyle relay in the Canadian city.

Ireland's head of Paralympic swimming Dave Malone is expecting some impressive performances from the squad.

"It's great to be back into major Championship action for the first time since London which was a huge success for Ireland," said Malone.

"With the six team members all having competed at the London Games, they are not fazed about competing on the World stage and I'm confident of some stellar performances from the team during the championships."