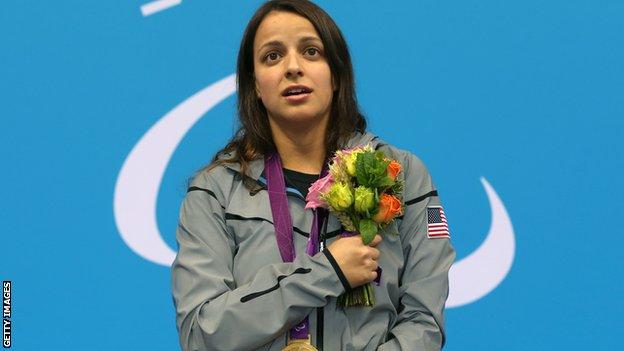 American swimmer Victoria Arlen, one of Briton Ellie Simmonds's main rivals, has been deemed ineligible for the IPC World Championships in Montreal, which start on Monday.

Before the Paralympics, she won an appeal after her impairment was deemed not severe enough to qualify.

However further medical tests have "failed to prove conclusive evidence of a permanent eligible impairment".

A statement from the International Paralympic Committee said: "IPC Swimming can confirm that Victoria Arlen will not participate at the 2013 IPC Swimming World Championships and future IPC Swimming competitions.

"Following her classification at the London 2012 Paralympic Games last August, IPC Swimming requested a medical report into her impairment within 12 months. This was duly provided by the USOC (US Olympic Committee) on 24 June 2013.

"The medical report has been reviewed by five independent medical experts. All are in agreement that the report, its assessment and its diagnosis fail to provide sufficient evidence of an eligible impairment leading to permanent or verifiable activity limitation - which is required under the IPC Swimming Classification rules and regulations.

"Therefore the athlete has been found non-eligible to compete in IPC swimming competitions.

"Following a USOC appeal, the board of appeal of classification upheld the decision."

Arlen is a former champion swimmer who was left paralysed in 2006 by a virus that affected her spinal cord and left her in a vegetative state for two years.

She has clocked faster times than Simmonds, also 18, in both the 100m freestyle and 400m freestyle this year.

Charlie Huebner, the Chief of Paralympics for the United States Olympic Committee said that his association were disappointed with the decision.

"Regardless of the outcome, we also feel the IPC classification process has to improve for all athletes throughout the world.

"As athlete-centric organisations, we can't allow decisions on the eligibility to compete to be resolved days before a major competition, especially after the athletes have spent months or years in training for that competition.

"We, along with other National Paralympic Committees will continue to request that the IPC review the classification process to take into consideration the best interests of Paralympic athletes throughout the world."