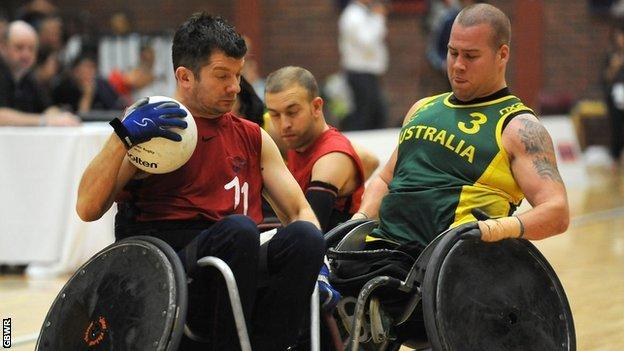 Great Britain wheelchair rugby captain Alan Ash hopes his return can herald success at the European Championship, which starts in Belgium on Monday.

The 38-year-old is back in the squad after missing the London Paralympics, where the team failed to win a medal.

And his experience will be vital in Antwerp, with six players making their major international debuts.

"We've never had so many newcomers in at once so it is a big challenge," Ash told BBC Sport.

"They have embraced it all and been working well at home but it will be interesting to see how it all goes in a pressure situation.

"We have had a big turnover of players since the end of the Paralympic cycle so it has given us a chance to blood some players, probably sooner than anyone would have anticipated."

Into the squad come high-point players James Roberts and Paul McDerby while Ayaz Bhuta, Christopher Ryan, Gavin Walker and Muhammad Fukral Islam will also be hoping to impress in their first Europeans.

"Part of my role is to help bring them up to speed," added Ash. "A key element of my game is my composure and making the right decisions under pressure so hopefully that is something they can see and learn from."

The GB team finished fifth at the London Paralympics to miss out on a medal for the third Games in a row.

Paul Shaw, who played at three Paralympics before retiring after Beijing in 2008, has replaced Tom O'Connor as coach and Ash, who has been playing the sport for over 20 years, believes the new-look squad can make an impact.

"In the last cycle, it was all about being fit but we didn't have the balance between that and playing tactical and technical rugby. There is more tactical knowledge now than we had in London.

"Because Paul and the assistant coach Justin Frishberg have played the game at international level, that helps enormously in getting it right.

"Paul and I were team-mates from the early 90s and he is a very honest player, will take your thoughts on board and isn't afraid to put his hand up and say he is wrong and try something new. In this cycle, things are different and there is no fear and people can speak their minds."

GB, who have won the European title three times, start their campaign against Austria on Tuesday before facing Germany, Belgium, Finland and the Czech Republic, with the top two teams qualifying for the semi-finals.

"I think two months ago we thought we had a good chance of gold but I think realistically success would be any medal," added Ash.

"Our biggest challenges in the pool will probably come from Belgium and Germany but I feel we can beat both of them and then the challenge would start in the semi-finals.

"Winning a medal here would be a good start on the road to Rio and would be a chance for some of the players who didn't get a lot of court time in London to show what they can do.

"It would have been nice to have a bit more time together but it will be a big platform if we win silverware. We have been told to enjoy ourselves and build towards the Worlds in Denmark next year and Rio, and it will be interesting to see what kind of results we can achieve."