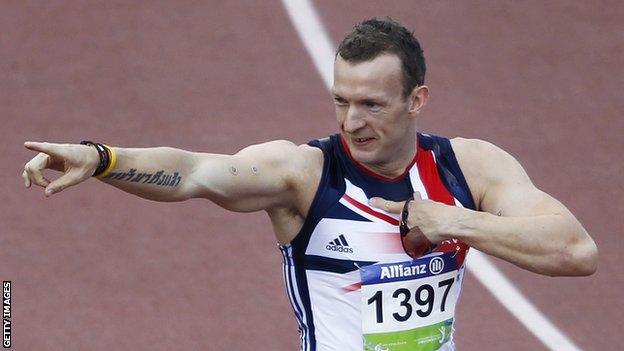 Heard the one about the man with no legs who ran from John o'Groats to Land's End?

And no, in case you were wondering, you haven't been redirected from the BBC to a website which specialises in off-colour gags from the 1970s.

In Britain's post-2012 landscape, such tales are no longer the preserve of working men's clubs staffed by unreconstructed comedians. Stuff like this - a double amputee running 40 marathons in 40 days - happens nowadays, so that you might even say such 'jokes' have been reclaimed.

And it is a measure of how far we have travelled, in terms of opportunities afforded to and attitudes towards those with disabilities, that people no longer seem surprised by such feats. Even the word 'disabled' seems faintly ridiculous when applied to someone who is able to do what you or I might only dream of.

I use 1.6 times the energy of an able-bodied athlete - my hips get smashed

"It's a personal challenge but I'm also getting out into local communities providing hope and opportunity for people up and down Great Britain," says British Paralympian Richard Whitehead, who set off on Monday and hopes to raise £1m for disability charity Scope and cancer charity Sarcoma.

"The message is: life need not have limits. Having an opportunity in life is important but what defines you is what you do with that opportunity.

"I'm not saying people have to run a thousand miles to be seen as successful, or run a marathon or win a Paralympic gold medal. But opportunities are out there, however big or small.

"You're dealt a set of cards when you are born and you just have to get on with it. I've done that. I've had to work for the things I've got, and I feel I deserve the success I've had after working hard for 30-odd years.

"I'm not sure I'd have been as successful as an able-bodied person but I hope I would have been driven to be successful, whatever cards I was dealt."

Britain's Paralympians have been afforded such widespread acclaim in recent years that it no longer feels inappropriate to ask any one of them: "Do you wish you had been born able-bodied?" Indeed, it was Whitehead's fellow Paralympic champion Jonnie Peacock who told me recently: "I'd definitely stay the same."

Whitehead's own inspiration was the Canadian athlete Terry Fox, a single amputee who ran 3,339 miles across Canada in 1980 before he was overwhelmed by cancer. "That sowed a seed in my head," says Whitehead. 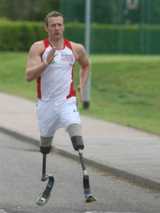 A scattering of seeds, apparently. Whitehead's athletic focus as a young man was swimming but illness and loss of form meant he was not selected for the 1992 Paralympics in Barcelona. The 37-year-old from Nottingham is also a handy gymnast and cricketer and represented his country in ice sledge hockey at the 2006 Winter Paralympics. But distance running has become his true love.

In 2004, Whitehead completed his first marathon in five hours and 19 minutes, not bad for a first outing on prosthetic blades. Within five years he was the double amputee world record holder. In 2010 Whitehead lowered his record to 2:42.52 in Chicago, at which point he had to rip it all up and start again.

At the London Paralympics there was no marathon category for leg amputees, so Whitehead examined the cards he had been dealt and got on with it. He bulked up, got explosive and won gold in the T42 200m instead.

In preparation for his latest challenge, Whitehead packed away the guns and got slim again - a thousand miles on prosthetic blades will test muscles and bones which able-bodied athletes don't know exist.

"I use 1.6 times the energy of an able-bodied athlete," says Whitehead. "So I'm putting away between 5-6,000 calories a day. I run through my backside, my quads and my hamstrings, but my upper body also works really hard and my hips get smashed."

But Whitehead, whose progressive parents pushed tirelessly for their son's inclusion in able-bodied sporting circles when he was a child, is defined by adversity.

"It's not all been rosy; I've had difficult situations where I've failed. But when you fail you learn a lot about yourself and come back stronger," he says.

"Not being selected for Barcelona got me down, made me wonder if it was all worth it. But I got stuck back in and I knew that when I got to London I'd blow the other competitors out of the water.

"But it's not only about winning medals. Paralympians are role models and patrons for sport and they have a responsibility to get positive messages out there. Everybody should be pushing the barriers, not only in their sport but in society. And hopefully we will find the next Richard Whitehead or Jonnie Peacock or Ellie Simmonds within our local communities."

But Britain's Paralympians have gone far beyond inspiring only those with disabilities. Whitehead, Peacock and Simmonds are viewed as elite athletes, not as curiosities to be patronised by the able-bodied. Try attempting to patronise a man about to run 977 miles in just over a month, see where that gets you.

"At the London Paralympics people saw what disabled people can do and how unbelievable their performances can be," says Whitehead. "And now disabled people are acting as role models for able-bodied people, especially children.

"We've still got a way to go - there are still situations where young and older people with disabilities find it tough to get involved with sport. But those are the sorts of things I had to go through growing up and I feel that if you want something enough, then you'll be able to go out and get it yourself."

So dig deep into your pockets, line the streets or join the man himself for a few miles on the road. "It's your chance to witness," says Whitehead, "that the power of sport is open to anybody in Great Britain, whatever the community or background you're from, whether you're able-bodied or disabled."