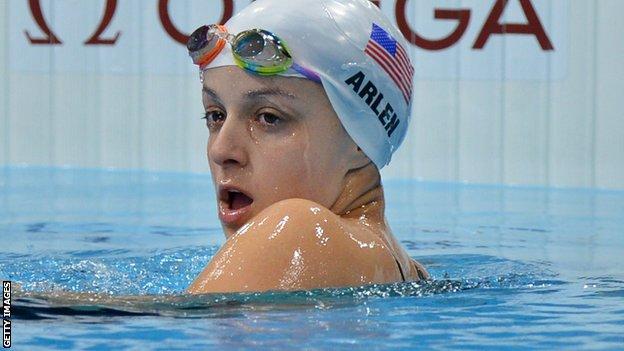 Paralympic swimmer Victoria Arlen says she is being "penalised for having hope" after she was deemed ineligible to compete at the IPC World Championships in Montreal.

The International Paralympic Committee ruled the American could not compete at this week's championships because she did not have a "permanent" disability.

"The reasons for it are unclear and didn't make any sense."

Arlen, 18, beat Great Britain's Ellie Simmonds to gold in the S6 100m freestyle final at London 2012, after winning an appeal against a judgement which ruled her impairment was not severe enough to qualify.

Since winning that gold and three silver medals at London 2012, Arlen has clocked faster times than Simmonds, also 18, in both the 100m freestyle and 400m freestyle this year.

She was one of the favourites for gold at the World Championships in Montreal and said she only found out she could not compete in Canada 24 hours after arriving in the country. 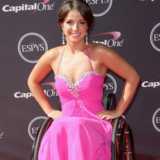 A statement from the International Paralympic Committee (IPC) said: "Following her [Arlen's] classification at the London 2012 Paralympic Games last August, IPC Swimming requested a medical report into her impairment within 12 months. This was duly provided by the USOC (US Olympic Committee) on 24 June 2013.

"The medical report has been reviewed by five independent medical experts. All are in agreement that the report, its assessment and its diagnosis fail to provide sufficient evidence of an eligible impairment leading to permanent or verifiable activity limitation - which is required under the IPC Swimming Classification rules and regulations."

Arlen is a former champion swimmer who was left paralysed from the waist down in 2006 by a virus that affected her spinal cord and left her in a vegetative state for two years.

"The timing of it all is the hardest part because I have trained all year," she said. "Everything was going good until three days before I left for Montreal when the US team got a call.

"Then, within a day of being in Montreal, I had to go home. The timing is horrible and just devastating. Even the US team is baffled at the decision because they have fought so hard and it made no sense.

"I am being penalised for having hope of one day being better. I am still clearly disabled and that hasn't changed in the last seven years and, unfortunately, it won't change for a very long time."

The IPC has upheld their decision, despite Arlen's father, Larry, sending a heartfelt letter to the organisation's president and chief executive, in which he describes how his family has been "torn apart physically and mentally" by the judgement.

Arlen is a role model for many, her personal website describing how, in addition to her swimming, she does motivational speaking - "Rock Your Disability" is her motto - acting and modelling.

The teenager, from Exeter in New Hampshire, is distraught she cannot continue to inspire others, and hopes the decision will be overturned soon.

"It's discouraging," said Arlen. "People are reaching out and offering a lot of love and support, but they are upset too because I have given a lot of people hope that they should follow their dreams and not give up.

"I swim for all those people and it's sad I cannot continue to inspire.

"It's no longer in my hands, but I know there are lawyers and government officials involved now. They are all taking care of it and I have to wait.

"They will continue to fight for me. I can't swim at the Worlds, but they are going to make sure this doesn't happen again and it gets rectified because the decision is so wrong.

"I continue to have the upmost respect for the Paralympic movement and the IPC and hope that this will not happen to anyone else. Nobody should have to go through this."