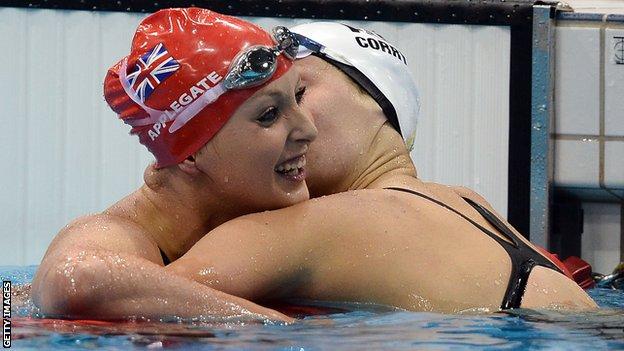 Paralympic champion Applegate won the same event, for swimmers with a learning disability, at London 2012.

The 16-year-old, who lives and trains in Norwich, also set a new world record time of two minutes and 9.88 seconds.

"The pressure after 2012 has been very stressful for her. I'm just over the moon," Pinniger told BBC Radio Norfolk.

She's trained so hard. She hasn't had a break for two years because London 2012 fell so late and we had to focus on this

"The expectation that she would repeat what she did last year has been hard for her to deal with.

"She did fantastically. I knew she could [break the world record], but it was a long day - it was a 14-hour gap between heat and final."

The Norfolk swimmer, who has Asperger syndrome, lowered her own world best by almost two seconds when taking victory in Montreal on Monday.

Applegate still has two events left to compete in - the 100m backstroke and 200m individual medley.

"Both events are secondary for her - the freestyle was the target all year," Pinniger added.

"If she is able to grab a medal, and maybe sneak a British record in the backstroke it would be a huge bonus.

"She's trained so hard. She hasn't had a break for two years now because the [2012] Paralympics were so late in the year and we had to focus on this - she deserves her three-week holiday when she gets back."