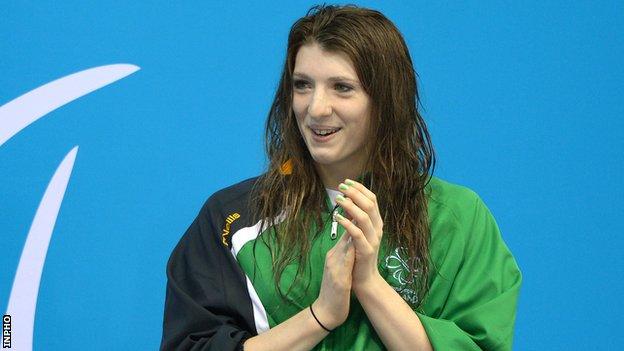 Bethany Firth secured her third silver medal at the IPC World Championships in Montreal as she took a big chunk off her 100m breaststroke personal best.

Firth also won silver in the 200m freestyle on Monday and the 100m backstroke on Wednesday.

I don't normally like swimming breaststroke but I'm so pleased

Friday's event is regarded as Firth's weakest but she produced a superb swim.

"I don't normally like swimming breaststroke but I'm so pleased."

Firth's earlier time of 1:20.50 in the heats had placed her third going into the final behind behind Morales and Great Britain's Nicole Lough.

The Northern Ireland woman produced the fastest reaction time off the block and at the 50m mark she was in second place just .09 of a second ahead of Lough in third.

But Firth was determined not to be beaten to the silver medal, touching over 1.5 seconds ahead of the bronze winner Lough who finished in 1:20.30.

Ireland's medal tally now stands at one gold, three silver and two bronze at these championships with Firth accounting for the three silver medals.

Ellen Keane will be the only Irish swimmer in action on Saturday morning in her final event of the championships, the 100m butterfly S9.

Keane, who has already won 100m breaststroke bronze, is the fifth fastest seed going into Monday's heats and should be confident of a final spot.

Ireland's gold medal was won by Darragh McDonald is the S6 400m freestyle on Monday.