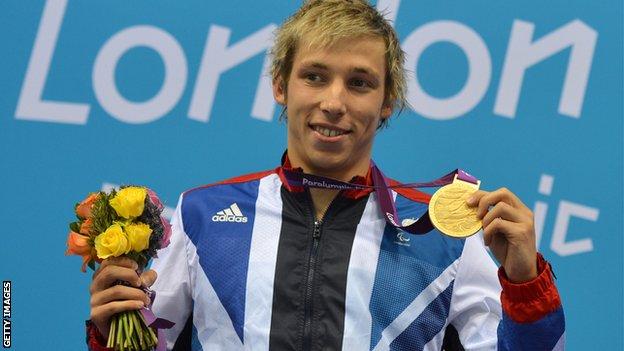 Paralympic Games gold medallist Jonathan Fox says he plans to defend his title in Rio in 2016.

The 22-year-old from Cornwall also took gold in the S7 backstroke at the recent IPC World Championships in Montreal.

"London was amazing but it's all a distant memory now and I've got Rio to go for in 2016 - that's my next long-term goal," he told BBC Radio Cornwall. 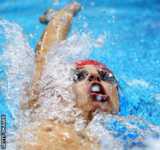 What it takes to be a Paralympic and World champion: Fox on his training routine

"After swimming, I'm in the gym for about 90 minutes and then I come back and swim in the afternoon.

"I do three 'key sets' a week which for me is Monday night, Wednesday morning and Friday night - this could be lots of speed work, aerobic development or a mixture of the two.

"It does get tiring but the gold medals are what get you up and keep you going."

"I'm pretty confident I'll try to defend the gold medal but it will be harder and harder."

Fox also competed at the 2008 Paralympics, and he said the memory of missing out on gold in Beijing had driven him on to new heights.

"I went to Beijing and went into the final with the quickest time and got silver. I wanted to make sure I didn't do that again in London and I just went hell for leather," he said.

"You've got seven other guys trying to get gold and there's a lot of pressure if you're number one."

Fox said the World Championships - where he also took bronze in the S7 400m freestyle - had been something of a step into the unknown because he could not be sure what shape his main rivals were in for the event in the aftermath of the Paralympics.

"It's always a struggle trying to get back after the Paralympics," he said.

"You don't know where people will be after the Games. They might take one or two months off. I took about three weeks off and then trained pretty hard so I was quietly confident going into the race."

And Fox insisted he had not given retirement from the sport any consideration - especially given his continuing domination of the S7 backstroke event.

"I'm only going to think about retiring when I start getting beaten and hopefully another GB backstroker can take my place," he said.

"It's going to get more difficult, you've got all the little ones coming up. I'm only 22 and I feel like I'm one of the senior athletes of the team.

"You never know when people are going to come up and beat your time, but it's actually good if they do as it gives you another goal to add to the list."