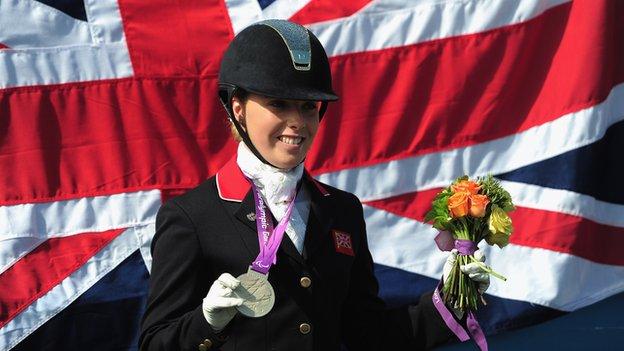 Wells, 23, scored 75.643 to win the Grade IV championship test - and put GB in a strong position in the team event.

Sophie Christiansen, Anne Dunham and Natasha Baker will all be in action in their individual tests on Saturday.

Wells won again on her horse Valerius, with whom she won three gold medals at the last European Championships two years ago.

"I couldn't have asked any more of him," said Wells, who won silver in both the championship test and freestyle in London last year but was part of the gold medal-winning team line-up.

"Whatever the result I was going to be pleased but obviously I am ecstatic."

Balshaw, 26, has only been working with his mount LJT Enggaards Solitaire since late last year.

But the partnership has blossomed and Balshaw was thrilled to land a medal in their first major international competition together.

"Pepo is so established and maybe it was premature to think I could beat him today," he said. "But I'm over the moon to beat everyone else and get a silver."