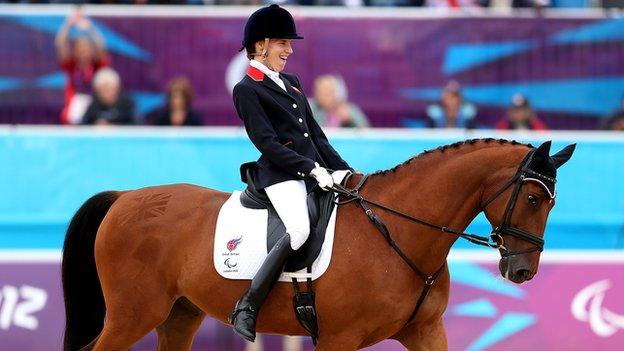 The pair won their respective championship tests in Denmark while there was a silver for Anne Dunham behind Christiansen.

The GB team are unbeaten at Paralympic, World and European Championships since the first Para-dressage event in 1996.

The medals add to the gold won by Wells and silver by Ricky Balshaw in Friday's championship tests.

Christiansen, who won three golds in London last year, continued her dominance in her Grade Ia category on board Janeiro 6, finishing on 76.609%, with Dunham, the reigning European champion, managing 75.174% on LJT Lucas Normark.

"I stayed relaxed and just let 'Rio' do his thing. I am really happy," said Christiansen, who was drawn second to go among 14 starters.

"I don't mind where I am drawn. I can only just go and ride the best test I can do. The draw is uncontrollable, so I don't worry about it, but the wait is still agony when you go early."

Dunham, 64, added: "My horse was much softer, more engaged today, and he stayed so calm.

"He was fantastic, and it felt like the best test he has done with me. It might not have been our personal best, but he was accurate. My favourite part is now to come - the music tomorrow."

Baker, who had some problems in her team test on Thursday, retained her Grade II title with Cabral, scoring 72.114%, which followed on from double gold in London last summer.

"I played safe today," she said. "I didn't over-ask for anything as I didn't want him to blow, and he responded brilliantly.

"I can ask for more tomorrow. and the trust is there. I set my own personal goals for the test and I achieved them all."