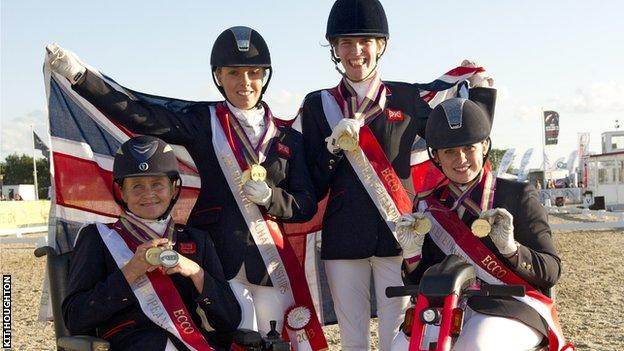 British trio Sophie Wells, Sophie Christiansen and Natasha Baker completed hat-tricks of golds with wins on the final day of the European Para-Dressage Championships in Denmark.

The trio had all won individual gold and were part of the winning team before their freestyle successes.

Wells scored an impressive 80.250% on Valerius to win the Grade IV category.

It was a ninth European career medal for Wells, 23, who won two silvers in the freestyle and individual competitions behind Michelle George of Belgium at last year's Paralympics.

"It feels amazing, I am just so proud of Valerius," Wells said.

"It is a really big event here, and I was able to take risks that paid off. I was able to go for those extra marks today, and I am delighted with the result."

It has been a happy end to a very tricky week

"My trainer said it was the best test I've ridden to date, so I am really pleased," Christiansen said.

"I thought Anne might just do it, she rode a lovely test. I did the best I could, and I was so glad I could show 'Rio' off here to the crowd".

"He has just got better each day, but he is still not got as good as I know he can be, which is a little bit frustrating for me," said Baker.

"He is an amazing horse and I know that there is so much in there, but I haven't been able to show it off. Hopefully, I will get the opportunity next year at the World Equestrian Games to do that. It has been a happy end to a very tricky week."

There was also a personal best freestyle score of 76.800% for Ricky Balshaw, who finished second on LJT Enggaards Solitaire to Austria's Paralympic champion Pepo Puch to give him his second medal of the week and ensure GB finished with 11 medals, including seven golds.