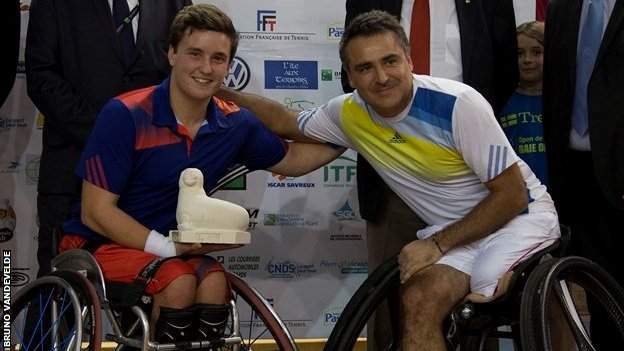 Reid and Houdet also paired up to win the men's doubles at the event.

"It has been an amazing week for me," Reid said. "After winning both titles and taking out the top three ranked players in the world, I feel great.

"I have been working hard in training recently on a few specific areas and to see those parts of my game having such a positive impact at this tournament is really encouraging.

"I'm really pleased with the fight I showed to come through two tough three set matches and delighted to have won the doubles with Stephane to keep our unbeaten record intact."

Reid, who will be hoping to climb up the rankings, saw a 5-2 lead slip away in the first set of the final before Houdet clinched a tie-break.

However, Reid also opened up 5-2 leads in both the second and third sets and, although Houdet took the eighth game in both of the last two sets, Reid held on for his third career win over the Frenchman - all of which he has achieved this year.

Next up for Reid is the Nottingham Indoors, which starts on 23 October at the Nottingham Tennis Centre before next month's NEC Wheelchair Tennis Masters (singles) and ITF Wheelchair Doubles Masters in Mission Viejo, Southern California, where Reid will again partner Houdet.