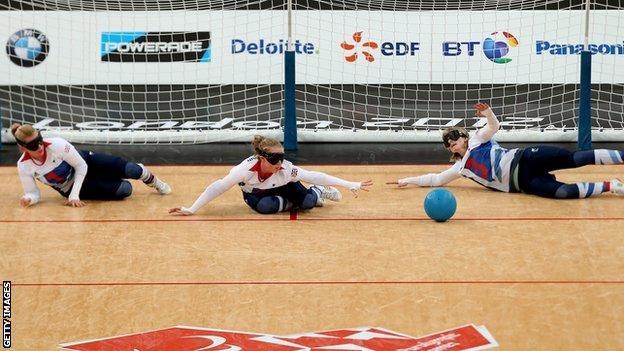 Great Britain goalball player Georgie Bullen gets animated when she talks about the changes in her sport since the London Paralympics.

"We were the lowest-funded British sport at the Games and beforehand had to do things like having all of the squad stay in my house for a weekend because we could get a hall nearby free of charge for training sessions," she explains.

"But now, because of our performance in London and the funding we have received on the back of that, everything is changing and the set-up we have has become so much more professional.

"We now have high-tech support and performance testing and we don't have to pay for everything, which makes us really feel like we are representing our country

"It is just amazing."

Goalball is the only Paralympic female team sport for blind and visually impaired athletes, and is played by teams of three using a 1.25kg ball with bells inside on a court the size of a volleyball court.

The GB women only had their place at the London Games confirmed in March 2012 and they went on to reach the quarter-finals where they lost on a 'golden goal' to eventual bronze medallists Sweden.

Their displays in front of sell-out crowds at the Copper Box earned the team a £1m award from UK Sport for the next Paralympic cycle, up from the £0.5m that the men and women jointly received prior to London, but the financial reward means more pressure is on the women's team as they prepare for the European A Championships in Turkey, the first step on the road to Rio 2016, which start on Monday.

Bullen will be joined in the team by fellow London Paralympians Jessica Luke and Anna Tipton, as well as newcomers Emma Jones, Laura Perry and Brittany Stead.

It is also the first major international tournament with new coach Jackie Sheldon who is new to goalball, having come from a rugby background. But Bullen believes it has given the team a fresh outlook.

"It was a bold move to appoint someone who hadn't got a background in goalball but Jackie has spent a lot of time looking at footage from other countries and our assistant coach Emily Luke is a former player so we have different minds coming together on the coaching team to find what is best for us," she explains.

"Jackie has changed our movement around the court and taken our game right back to basics. We've altered our defensive positions on court and I now cover a lot more ground. It has been daring and a bit scary, but when it starts to pay off it is a relief and makes us excited for the future.

"We've wanted growth for years but because of the Paralympics we are now seeing the growth right before us and the sport is in a much stronger position."

The GB team will start their European campaign against Finland, who lost in the bronze play-off in London before taking on Russia, Ukraine and Sweden.

They have been set a target of qualifying for next year's World Championships, and a medal in Turkey would secure their place there, but Bullen knows that the increased funding puts extra responsibility on the team.

"We now need to show we deserve the funding and to justify the faith that people have put into us," she said. "Having targets might put us under pressure but it is also an opportunity for us and I'm sure we can pull it off.

"Europe is a tough region to qualify from. We just have to make sure we focus and do the best we can. If we play our games to the full ability, there aren't many teams who can beat us."