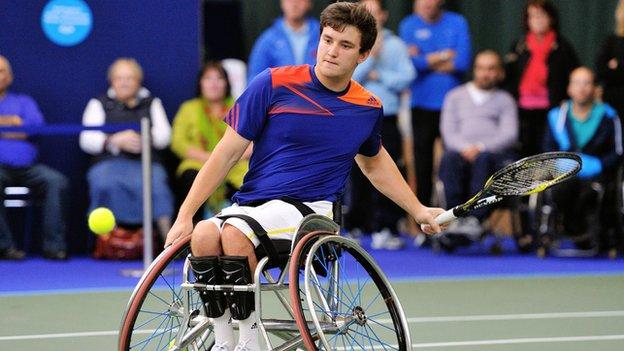 British wheelchair tennis player Gordon Reid wants to finish a superb 2013 on a high at this week's end-of-season Masters events in California.

The 22-year-old Scot has beaten the world's top three players this year on the way to reaching a career-high world ranking of four.

He is also the top-ranked Briton of all time in the men's singles.

"I'm going in there really confident but the standard will be high." he told BBC Sport.

Reid, who is one of nine Britons taking part in the event in Mission Viejo, will play in the singles, which starts on Tuesday, and partner world number two Stephane Houdet of France in the doubles, which begins on Thursday.

He has been playing tennis since the age of six but took up wheelchair tennis in 2004 after being left paralysed from the waist down by transverse myelitis - a condition which causes inflammation of the spinal cord.

He spent six months in hospital and, although he regained some movement and can now stand and walk, he is unable to run.

Two years later, aged 14, he made his debut on the ITF Wheelchair Tour and, after becoming world number one junior, made a successful transition to the senior ranks.

He reached the quarter-finals of the men's singles at his second Paralympics in London last year.

In 2013 Reid has scaled new heights. He has landed six tournament singles victories, including his first ITF 1 Series success in France where he beat the world number one Shingo Kunieda of Japan, French rival Houdet and number three Maikel Scheffers of the Netherlands on his way to the title.

"I've changed my training set-up and hit a lot more with the junior squads at the University of Stirling, which has had a positive impact, and I've now got a bit more focus in training and am working hard and it is all paying off," he said.

"To be third in the rankings would be a nice way to end the year. There are two or three of us who are challenging for that spot so it will be interesting to see what happens to the rankings as a result of the Masters series."

After California, Reid gets to spend some time at home catching up with friends and family before travelling to Australia in early January where he will make a debut appearance at the Australian Open in Melbourne.

"I would love to win one of those Grand Slam events in 2014 but I know there are still things I need to work on in training. I'm sure if I do that, I can challenge for the number one spot."