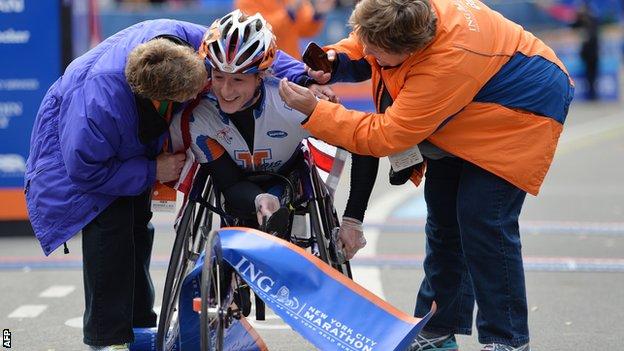 The Russian-born American had already won the Boston, London and Chicago races in 2013.

Born with spina bifida and adopted at the age of six, McFadden is the first person to win four major marathons in a calendar year.

The victory in New York adds to an outstanding year for the 24-year-old, who also created history at the IPC Paralympic World Championships in July by becoming the first woman to win six gold medals at a global championship.

McFadden is also aiming for a place in the US cross-country sit-ski team at the 2014 Winter Paralympics in Sochi.

Great Britain's Shelly Woods, silver medallist in the wheelchair marathon at London 2012, finished in eighth just over 15 minutes behind McFadden.