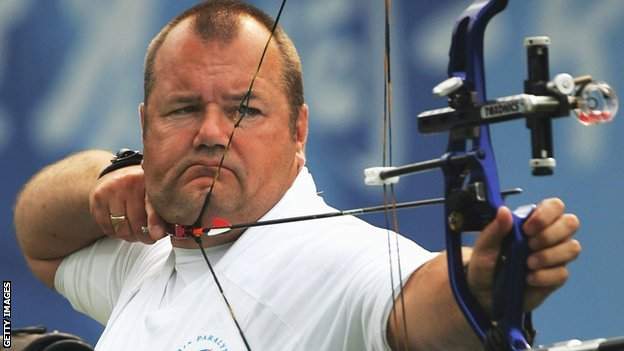 Stubbs, 48, finished first in the individual competition in Bangkok and claimed compound team gold, alongside Richard Hennahane and Frank Maguire.

Brown, 25, had won every World and Paralympic title available since 2007.

But she took the silver medal this time after losing out to Turkey's Burcu Dag in a one-arrow shoot off.

Stubbs, who last won the World Championship in 2005, won his second individual title against Finland's Jere Forsberg, winning by just a single point.

The men's compound team were also celebrating after winning their match against Italy by two points with a final score of 227-225.

Britain have enjoyed a successful competition in Thailand with Paralympic silver medallist Mel Clark winning a bronze medal in the women's compound on Tuesday when she defeated Ukrainian Larysa Mikhnieva 137-135.

Michael Peart, Archery GB's paralympic coach said: "We are all immensely proud of the whole team who have been competing out here in Bangkok and for Danielle, Mel, John, Richard and Frank to win medals at the World Championships is just fantastic."

There could be further joy for the British competitors on Thursday as Brown and Stubbs team up in the compound mixed team against Italy, while Paul Browne is shooting for individual gold in the men's W1 recurve.

The men's recurve team which consists of Kenny Allen, Phil Bottomley and Browne also compete in the bronze medal match.