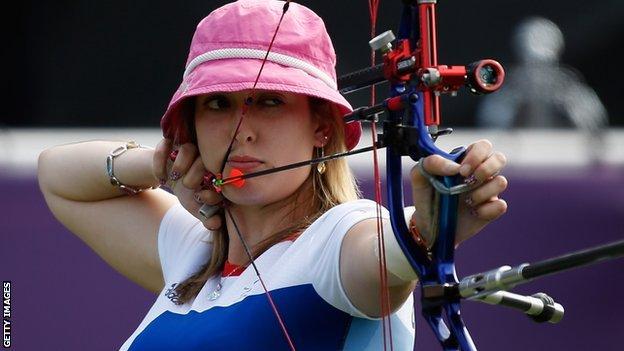 Britain's double Paralympic archery champion Danielle Brown has been ruled out of future international Para-Archery events after a change in the sport's classification procedures.

It means she will be unable to defend her Paralympic title in Rio in 2016.

Brown has a condition called complex regional pain syndrome - which gives her chronic pain in her feet - and she shoots while seated on a stool.

However, World Archery has changed the classification rules for future events.

In a statement, the governing body said: "World Archery, in full agreement with the International Paralympic Committee, clearly states that the Paralympic Games and World Archery Para Championships should not be for anyone who has a physical disability, but for those athletes with a disability where the disability has a direct and important impact on the archery performance.

"As of 1 April next year the classification rules will be changed to reflect this situation."

Brown won compound gold in both Beijing and London but she has also competed for GB in able-bodied competition and won compound team gold for England at the 2010 Commonwealth Games in Delhi.

Earlier this week, she won two silver medals at the Para-Archery World Championships in Bangkok, narrowly failing to claim her fourth individual world title in a row.

Archery GB performance director Sara Symington said: "We are extremely saddened to say that Danielle Brown has not been classified under the new criteria, which means she is no longer able to compete at Paralympic archery events on behalf of Great Britain.

"We are so proud of all she has achieved as a Paralympic archer and we wish her all the best for the future. We will be offering Danielle our full support over the coming weeks and months."