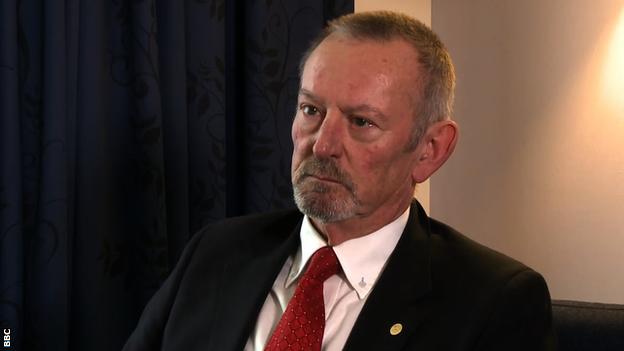 With 10 days until the ballot in Athens, Dickson believes it is far from certain that his rival will win.

A change in the IPC's rules after 2001 has enabled Craven to seek a fresh mandate but, while recognising the legitimacy of his candidacy, Dickson believes it is against the spirit of the organisation's rules.

"I think our constitution, and its spirit, should be respected and valued."

As a former president of the Cerebral Palsy International Sports and Recreation Association (CPISRA), Dickson was given its backing to stand in the election and he believes his candidacy can prompt an essential debate.

"I don't think a coronation at this time is right," he added. "[An election] allows the members the opportunity to consider and express their views about what they would want to see going forward.

"I felt it was an opportunity to stand, to have an election and to raise the issues that were important to me which are about the style, the substance, the openness, the transparency and building our partnership with the International Olympic Committee."

Dickson, who lives in Germany, wants to see growth in Paralympic sport from grassroots level up but he also feels strongly about allowing IPC members to have more of a say and promises to "rule nothing in or out" about changes to how the organisation engages over key issues.

"A number of our national Paralympic committees feel like they don't have a voice," he insists. "They are not able to get their voice across and that needs to be changed.

"Do they feel like they get a chance to raise their issues? What we have to do is find a way to make members feel truly engaged."

And while declining to discuss specific numbers, Dickson is confident over the backing he has received so far.

"No doubt there'll a lot of be chit-chat and discussions in corridors [before the election]. But I have a significant number of people who have indicated they are supportive of my candidacy."

With the Sochi Winter Paralympics beginning in March, Dickson has clear views on where the IPC should stand given the controversy that has developed over Russia's introduction of anti-gay propaganda rules and the prospect of Paralympic athletes protesting against it.

"I think athletes should be encouraged to speak their mind and say what's right for them. We've seen some athletes come out and make comment, some athletes will choose not to," he said.

"I don't think the IPC should be in a position of orchestrating or demanding campaigns. What we should do is recognise is that everybody is an individual and has a right to state their case.

"I believe our Russian colleagues are doing everything they can to make that a better environment. I'm committed to working with colleagues in Russia both to improve the quality of life for disabled people and, of course, for those whose gender or sexuality is under question in that country.

"Given the state of the world today, wherever the Games might go in the future, we'll always come up against certain issues.

"We can do more by representing all the best of humanity and by showcasing that we have a greater effect on people's attitudes by packing up our tent and running away."