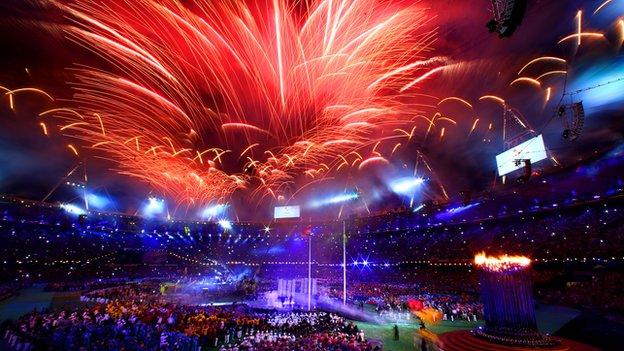 The International Paralympic Committee hosts its General Assembly in Athens this weekend with the organisation on a high following the success of the London Paralympics.

Interest in the Games has led to a surge in participation and the profile of disability sport.

Sunday sees the election of the IPC president, with current incumbent Sir Philip Craven, who has been in the role since being elected in 2001, being challenged by fellow Briton Alan Dickson, the former president of the Cerebral Palsy International Sport and Recreation Association (CPISRA).

Craven is a five-time Paralympian in wheelchair basketball and has overseen a period of dramatic change and development in the Paralympic movement, while Dickson is an experienced administrator.

Why do you want the role?

Craven: I've had a good taste of the role over the past 12 years and I want more of it. I could not have imagined the heights that the Paralympic Games and athletes have risen to and it has been an amazing experience, one that I never thought would be as fulfilling as it has been. We talk about the Paralympic movement taking off in London and I want to ensure that take-off is sustainable.

Dickson: As president of the IPC you are in a position that can influence the style, substance and direction the movement takes over the next few years. I believe it is the key role in the Paralympic movement and I have the skills necessarily to undertake that task with confidence.

Craven: I started playing wheelchair basketball aged 17 and I have been an athlete and an administrator - the Paralympic movement courses through my veins. I've had 12 years as president but I have an incredible amount of energy to move forward and to continue this momentum and really assess where we have come from.

Dickson: I have worked in the disability sector as chief executive of a large voluntary organisation which delivered services to children and adults with disabilities. In addition, I have been involved in Paralympic movement since the early 90s through my involvement with CPISRA and been on the governing board of the IPC for the last eight years.

What are the biggest challenges facing the Paralympic movement?

Craven: The biggest challenge, which is also a massive opportunity, is maintaining the Paralympic momentum. Everyone remembers London but we are such a young organisation that if we don't maintain the momentum from elite events then there is a danger we will slide down faster than we have come up.

There is also so much work to be done in support of our members and developing new athletes and getting the Paralympic movement embedded into each of our member nations.

Who is Sir Philip Craven?

Dickson: London was an amazing success and the Paralympic Games were fantastic but we have to look forward - it is important to remember and celebrate the past, but at the same time look forward.

We have to grow the legacy, grow the number of athletes that come through from grassroots to elite and develop the movement. The movement needs to grow and reflect the needs of those who are participating.

What changes would you bring?

Craven: I don't believe we are in a bad situation - we are in an exciting and positive situation and what we need to do is see how we can further improve things. If we needed a root and branch review, why have we been so successful?

But people may have concerns because we are such a young organisation and have come a long way in a short time. We have to decide if change is needed and where it is needed and what is needed. If elected, for the 25th anniversary of the IPC in 2014, I want us to have a gathering for interested parties to come together and assess for ourselves where we are and where we need to be.

Dickson: Change is always a good thing but it should be an evolutionary change - I don't believe in revolution. The Paralympic movement is in a good place but I would bring a change to the style and some degrees of substance and, I think in some cases, the direction we might take.

But for me, the most important thing is to have an open and transparent leadership that is fully inclusive of all the membership, which is truly global, and we must recognise the differing cultures, religions and stages of economic development of the member nations and work as a group as a whole.

Where would you like to see the movement at the end of your term of office?

Craven: I would like to have seen exciting Games, both in Sochi and Rio, and for every one of our members to be happy with the support that we are able to give them in development of the Paralympic movement and happy with the prospects they have for furthering the movement.

The IPC does not do the work of the Paralympic movement - it supports all its members and I would like to think we will have moved on in four years and continued to progress.

Who is Alan Dickson?

Dickson: At the end of the four-year term I would want to see success of Rio and Sochi Games and build forward from there. I would want to see a full governance review having been undertaken within the movement so we are ready to face the challenges over the next few years.

In four years' time I would want us to be able to look back and remember London and Sochi and Rio as excellent Games and look at how well we have done in making substantive changes in the way we operate and what that has led to.

What is your message to Paralympians?

Craven: The IPC's vision is to enable Paralympic athletes to achieve sporting excellence and inspire and excite the world. We are an athlete-centred organisation and athletes are at the heart of what we do and that will remain if I am re-elected.

I will not change my spots over the next four years but that doesn't mean that there won't be change. We will look to the quality of sporting events, increasing the number so athletes have more competitive opportunities and remain true to our values - courage, determination, inspiration and equality.

Dickson: I would be an inclusive, open and transparent leader. I want to hear the critical views because I think we only learn through criticism. I would want our athletes to recognise that the movement was athlete-centred and for the sports and everyone within the movement to feel they are truly valued and truly involved in the direction we take. I want people to say at the end of four years that yes, we were involved.