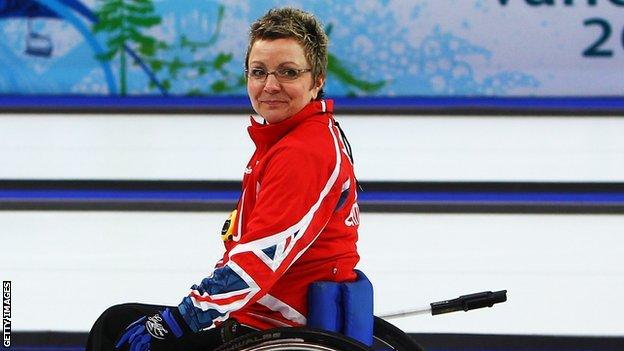 Turin Paralympic silver medallist Angie Malone has been named as the fifth athlete to complete the GB wheelchair curling team for the Sochi Winter Paralympics.

The 48-year-old from Girvan in Ayrshire is a two-time World champion and also competed at the Vancouver Winter Games.

The Games begin in Russia on 7 March.

"We've all worked really hard to remain really focussed and committed to our training, and the team have brought home some fantastic results from recent competitions," she said.

"The squad are delighted that the hard work is starting to pay off and I'm really excited that I can continue the journey to Sochi with them.

"I've been privileged to be part of two Paralympic Games in Turin and Vancouver and those experiences were amazing. The sport has become even more fiercely competitive as the years have gone on, but it's made the game more exciting.

"I believe I can take my experience forward as a player and share this with the team. I'll be there to support them in every way that I can so that we can deliver a performance to be proud of in Sochi."

"With all five athletes now selected, we can continue to focus on perfecting our preparations for Sochi so that we can deliver our best performance when the Games get under way," he said

The team won silver at the recent Cathy Kerr Memorial Bonspiel, losing out to Canada in the final before emerging victorious in the US Open final against Russia. Their final competition will be the British Open from 19-21 January in Hamilton.

The GB skiing team for Sochi, which will include between five and seven competitors, will be announced in January.