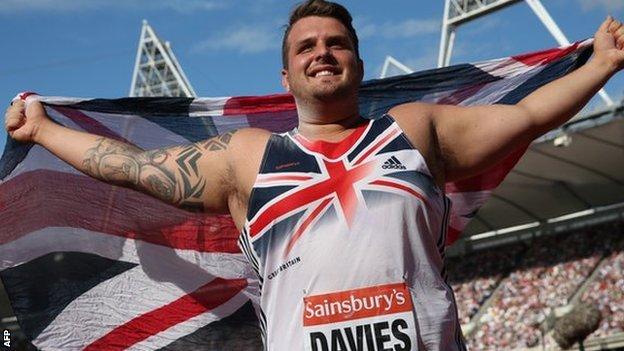 Paralympic champion Aled Sion Davies is confident he will be able to defend his discus title in Rio in 2016.

The International Paralympic Committee (IPC) announced in July the F42 category of the event was being removed from the games.

The announcement left Davies "angry and frustrated" and the 22-year-old has lobbied to have the decision reversed.

"I'm pretty sure, one way or another, I'll be throwing discus in Rio," he told BBC Radio Wales.

"They [IPC] reshuffle the events now and then and there's a high demand for my event.

"There's been a lot of protesting and a lot of upset athletes, and I know, going into Rio they are definitely reconsidering.

"But if not, I'm in a place where I'm competitive for a medal in the category above anyway."

Bridgend-born Davies won a bronze medal in the F42/44 shot put before claiming gold in the F42 discus at the London 2012 Paralympics.

And the Welshman become double world champion after winning gold in the F42 discus and F42 shot putt at the IPC Athletics World Championships in Lyon last July.