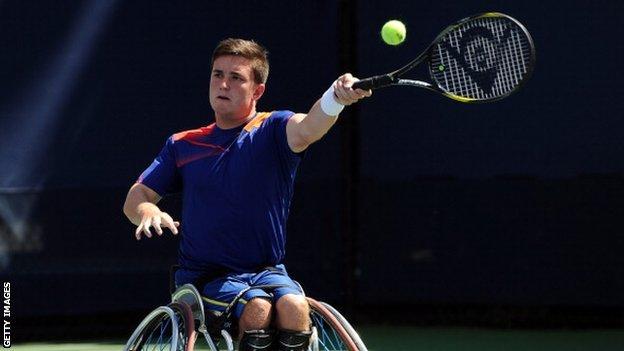 Gordon Reid got his preparations for the Australian Open off to a perfect start by winning the men's singles Super Series wheelchair tennis title at the Sydney Open.

World number four Reid, 22, became the first Briton to win the singles competition as he beat Takuya Miki of Japan 7-5 6-3 in the final.

Reid, who reached the final with a semi-final victory over world number one Shingo Kunieda, added: "It's great preparation for my first Australian Open and I can't wait to get out on court in Melbourne now.

"To beat the world number one again en route to winning the title is a big confidence boost."

"I had some great support," said Reid. "It was really nice of David and Shelley to come out and support alongside fellow players and support staff."

Lucy Shuker also had success at the tournament, by winning the women's doubles title as her and Jiske Griffioen of Netherlands beat Yui Kamiji of Japan and Britain's Jordanne Whiley 6-2 6-2 in the final.

It meant British players had collected three golds at Super Series level, the highest tier of wheelchair tennis tournament outside of the Grand Slams.

Reid will take part in the ITF 2 Series Melbourne Open, which starts on Thursday, before the Australian Open Wheelchair Tennis Championships which takes place at Melbourne Park from 22-25 January, during the second week of the Grand Slam.