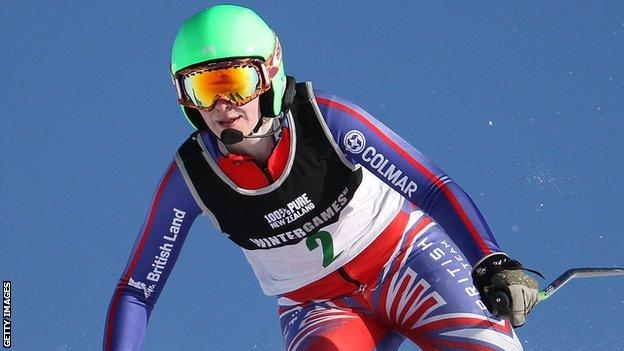 The pair are tipped for major honours in Russia after winning medals at World Cup and Europa Cup events this season.

What is not in doubt is the skill, determination and commitment of our athletes, who have shown that they can thrive under pressure and compete up there against the world's best

Also included is retired serviceman Mick Brennan, who lost both legs in a suicide bomb attack in Iraq in 2004.

The Winter Paralympics run from 7-16 March.

Knight, who is also visually impaired and will race against Gallagher and Etherington, will be Britain's youngest-ever winter Paralympian, having just turned 15.

Britain, who have never won a Paralympic gold medal, have been given a target of between two and five medals at the Games.

Gallagher, who was the first person from Northern Ireland to compete in the Winter Paralympics, finished sixth in the slalom and fourth in the giant slalom with previous guide Claire Robb in 2010.

Since teaming up with current guide Charlotte Evans in 2011, the pair have enjoyed plenty of success.

Gallagher, 28, told BBC Sport that standing on the podium in Sochi would be "a dream come true".

They have won medals at the European Cup before claiming two silvers and a bronze at the World Cup event in Copper Mountain last weekend.

Knight, who only joined the team in 2012, will be guided by Rachael Ferrier in her first major international competition.

Turney, Brennan and Sneesby will all compete in the sit-ski events.

Turney, whose best finish at the 2010 Games in Vancouver was sixth, is aiming to better that this time around.

"I've put a huge amount of hard work into my performance in the four years since Vancouver," she said. "I feel a much stronger athlete now."

Brennan lost both legs after surviving a suicide bomb attack while serving in Iraq in 2004 and took up skiing through the Help for Heroes scheme.

Sneesby, 19, has been skiing with the BDST Youth Development squad since he was talent spotted at the age of 13.

Whitley, 16, will make his Games debut in the standing category and is currently ranked second in the world at under-18 level.

ParalympicsGB chef de mission Penny Briscoe believes the GB squad travelling to Sochi will be the best prepared athletes for a Winter Games.

"We know that the margins will be small and that we cannot underestimate how others will perform on the day," she said.

"What is not in doubt, however, is the skill, determination and commitment of our athletes, who have shown that they can thrive under pressure and compete up there against the world's best."