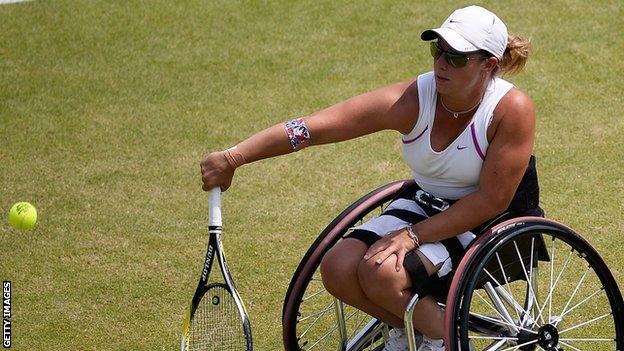 Britain's Lucy Shuker and Andy Lapthorne are into their first singles finals of 2014 at the Melbourne Wheelchair Tennis Open.

Shuker booked her place in the women's singles decider after top seed Sabine Ellerbrock of Belgium retired with the Briton leading 6-2 4-3.

In the men's singles, Gordon Reid lost to world number one Shingo Kunieda.

Reid was beaten 6-1 6-3 in the semi-final by his Japanese rival but the Scot reached the doubles final with partner Maikel Scheffers.

Shuker's success over Ellerbrock gave her a second win over a top-five player in consecutive days and the world number eight will play Japan's Yui Kamiji in Sunday's final.

It will be the pair's second meeting in successive tournaments after Kamiji, the world number three, edged Shuker in a closely-fought quarter-final in Sydney last week.

Lapthorne, who like Shuker and Reid will be in action at the Australian Open next week, had match points in the second set against Alcott before eventually wrapping up victory and will face world number two Lucas Sithole of South Africa for the title.