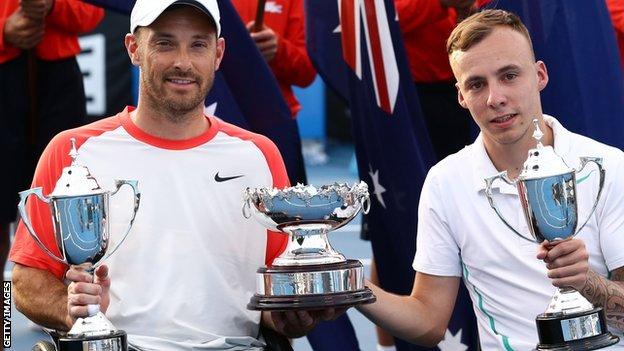 "Australia is where I made my Grand Slam debut in 2011 and it's great to get another title," said Lapthorne.

The quad doubles category comprises players who suffer with quadriplegia.

After wasting a match-point when 5-3 up in the second set, Lapthorne and Wagner closed out the match and took the title in their first tournament as partners.

Victory and another title offered some revenge for Lapthorne, who lost in a deciding set to Alcott in the singles semi-final earlier in the day.

"This one is dedicated to my late auntie," said Lapthorne, the Australian Open quad doubles champion with fellow Brit Peter Norfolk in 2011 and 2012.

"I'm really happy to get my third Australian Open title and want to thank David after we have been on opposite sides of the net so often in other Grand Slam finals,"

In the men's doubles Reid and Dutchman Maikel Scheffers stretched their unbeaten sequence for the season after a 6-2 7-5 semi-final win over Gustavo Fernandez of Argentina and Michael Jeremiasz of France.

Earlier in the day Whiley saw her bid to reach a first Grand Slam singles final come to an end in a 6-1 6-1 semi-final defeat to Ellerbrock.