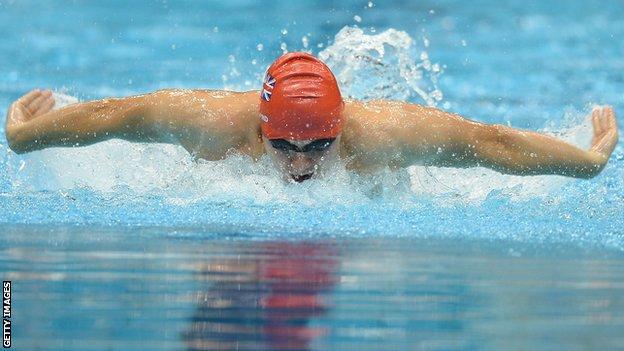 Paralympic gold medallist Sam Hynd has announced his retirement from swimming at the age of 22.

Hynd, who has club feet and a mild form of muscular dystrophy, won gold in the 400m freestyle S8 in world-record time at the 2008 Paralympics.

He went on to win a bronze medal in same event at London 2012.

Hynd said: "Winning gold in Beijing will stay with me forever and I still hold the world record from that race, which is also a special feeling."

Sam was an excellent member of the team, who helped to inspire the next generation of athletes

Nottinghamshire's Hynd, whose brother Ollie is also a Paralympic gold medallist, continued: "I'll miss the sport but I was ready for the next step.

"I just felt it was time for a change and a new challenge in my life.

"I have been competing internationally for almost 10 years and I knew I needed a new focus.

"I have loved swimming. It has been my life for so long and brought me so much."

Sam Hynd burst onto the international scene with gold at Beijing in a time that is still a world record, as well as a bronze medal in the 200m individual medley S8.

He won three golds in European Championship events and secured a gold at the 2009 World Championships.

At London 2012, he went and came away with a bronze, with Ollie winning sliver.

"I want to thank everyone at British Para-Swimming for their support and everything they have done for my career over the years," he added.

"I would also like to thank all of my coaches who have helped me on my journey.

"Many thanks to Glenn Smith whose expertise and talent made winning my gold medal possible.

"Also to Billy Pye, who coached me to a bronze medal in London 2012 and Ross Nicholas for his work with me to secure a silver medal at the World Championships in Montreal 2013."

British Swimming's national performance director Chris Furber added: "Sam was an excellent member of the team, who helped to inspire the next generation of athletes with his great success in the sport.

"Throughout his career he has shown huge dedication to the sport

"I have enjoyed working with Sam since I joined the sport and on behalf of everyone at British Para-Swimming, I want to wish him well for the future."