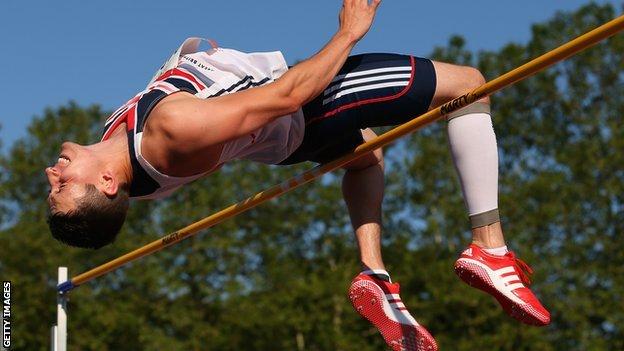 High jumper Jonathan Broom-Edwards is hoping to use his appearance at the British Indoor Championships on Sunday to reach the top 10 in the country.

The 25-year-old, one of BBC Sport's Paralympic Ones to Watch for 2014, has suffered several niggly injuries to his back since the turn of the year.

But he recovered to equal his personal best of 2.08m in Loughborough last weekend.

"To have jumped that, I feel I deserve to be in Sheffield," he said.

"I'm just outside the top 10 in the country so I would really like to go 2.09 or higher to get into that but also challenge the current Paralympic world record of 2.13.

"With the atmosphere in Sheffield I hope I do well but I've never competed in front of that sort of a crowd before so I think I will either sink or swim.

"The pressure will be on but I think I react well to pressure so I want to try not to focus on the crowd and use the atmosphere to my advantage. But if it doesn't work out for me this weekend I know what I need to work on for the outdoor season, which is my main focus."

Broom-Edwards, who won silver at last year's IPC Athletics World Championships in Lyon, has a deformity of his left foot but also has issues with his right foot, an unstable right knee and muscular imbalance throughout his body.

It was only after the London Games that he realised his impairment made him eligible for Paralympic competitions.

In Sheffield, he will be going against a number of his training partners, including defending British Indoor champion and London Olympic bronze medallist Robbie Grabarz, but knowing that an improvement on his personal best would also almost certainly move him up the rankings.

"I am always trying to chase the other guys and that sort of push is good for me," he admitted. "I would like to come close to the world record but if I don't, I will be happy if I know I am heading in the right direction and things are clicking into place."