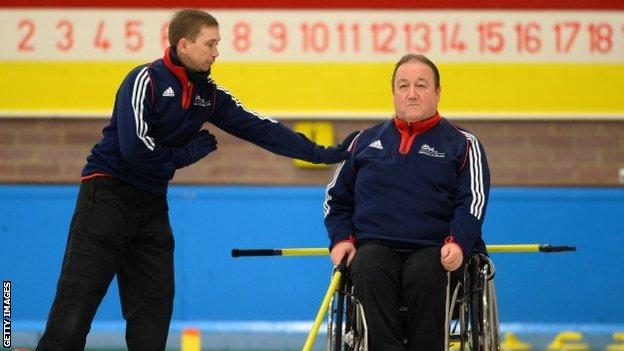 Great Britain wheelchair curler Tom Killin will miss the Winter Paralympics in Sochi, which begin on Friday, 7 March, because of illness.

The 63-year-old, who won silver in Turin in 2006, would have been taking part in his fifth Games.

He has been replaced by Jim Gault, who competed for Scotland at the 2012 World Championships and has been part of the GB set-up for four years.

"We are devastated for Tom," said head coach Tony Zummack.

"He has trained very hard over the last four years to prepare and he is incredibly disappointed that he is not in a position to compete. However, we have to make the best decision for Tom's health and for the team as a whole and this unfortunately means that Tom will not join us in Sochi.

Killin fell ill a few days ago and medical advice was that he would not be fit enough to travel and train in the lead-up to the Games.

Gault admitted he had mixed feelings about his inclusion.

"I've trained and competed alongside Tom as a team-mates for several years so I know how hard we all trained and how much he wanted to represent GB once more so of course I am really upset for him," he said.

"At the same time, I have just been given an amazing opportunity to represent my country on the biggest stage in disability sport and of course I am looking forward to it. I just want do my very best for the team and put in some great performances on the ice."