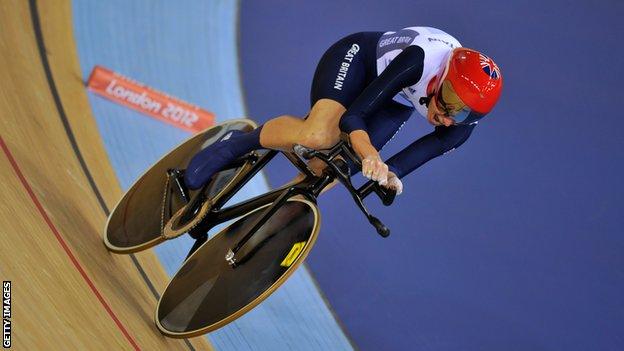 Dame Sarah Storey has been included in the British team for the Para-cycling Track World Championships in Mexico.

Teenager Sophie Thornhill, one of the BBC's Ones to Watch for 2014, will be making her major championship debut.

She will ride with pilot Rachel James, sister of world champion Becky James, in the tandem events from 10-13 April.

The competition in Aguascalientes is the first opportunity to earn qualification points towards the Rio Paralympics in 2016.

Sarah Storey won five Paralympic gold medals as a swimmer before switching to cycling. Her 11 gold medals are a joint British record with Baroness Tanni Grey-Thompson

Also included are London Paralympic medallists Neil Fachie, who will ride with new pilot Pete Mitchell, Jon-Allan Butterworth and Jody Cundy as well as Shaun McKeown, Crystal Lane and the tandem pairing of Lora Turnham and Corrine Hall, who won World Championship gold and silver on the road last year

British Cycling's Para-cycling performance manager Gareth Sheppard said: "I am pleased with the team we have selected, but it was a tough decision which is testament to the strength of the whole squad.

"With limited track competitions on the international calendar, this world championship event is crucial for us to score some valuable qualification points for Rio. Our preparations have been going well so far for the World Championships and we're all looking forward to getting out there and racing again."