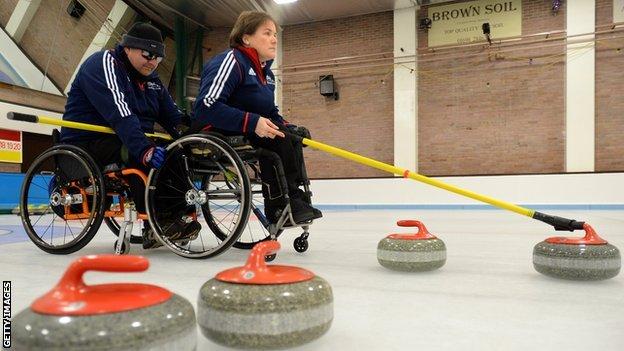 Great Britain's curling team begin their bid for a first gold medal at the Winter Paralympics on Saturday, with skip Aileen Neilson keen to inspire other females to take up the sport.

The 42-year-old Scot, who is currently on a career break from her job as a primary school teacher, created history in Vancouver four years ago by becoming the first female skip in international competition when she took over from Michael McCreadie for GB's last round-robin game against Japan.

She has retained the role since and leads Britain in their opener against defending champions Canada at the Ice Cube Curling Centre.

Despite being the only female skip in Sochi, Neilson says she has noticed a change in the sport with more women getting involved.

"We all bring different elements to the game, but as skip I hope I bring leadership qualities and be as professional as I can and be a good role model, not just for my own team but for any curlers watching," she says.

"I want to try to inspire other females, not only to participate, but to play in all positions where they might not feel comfortable to begin with, because that is how I started.

"At one competition recently there were two other female skips on the adjacent rinks, so certainly there are more females playing and in all positions which is great to see."

Neilson, who suffered nerve damage to her legs after an operation as a toddler and used crutches before her condition deteriorated eight years ago, comes from a family of curlers but came to wheelchair curling after bringing her class of students to a session at the local ice rink and became hooked on the sport.

After Olympic silver and bronze medals for the Great Britain men and women curlers, the GB team of Neilson, Gregor Ewan, Rob McPherson, Jim Gault and reserve Angie Malone will be hoping to go one better.

The Canada opener is the first of a busy run of nine round-robin matches in six days before the medal play-offs.

The curling stones and rink are the same as the able-bodied game, but each player is supported by a team-mate as they deliver the stones with the help of a cue-like device, and the game is played by mixed gender teams over eight ends, rather than 10.

In a sport which can be decided on millimetres, spectators will notice one major difference between wheelchair curling and its Olympic equivalent - the lack of sweepers - meaning precision is the key to success.

"We have to be really accurate because we don't have sweepers to help alter the distance and direction of the stones," explains Neilson. "We certainly have to be more accurate than the able-bodied team."

For coach Tony Zummack, a Canadian former ice hockey player and able-bodied curler who took charge just over three years ago, the success of the Olympic team - who have trained regularly alongside the Paralympic squad - has given them a big confidence boost.

"Morale has always been high, but it is nice to see some medals coming home from the Games and shows that the work that all three programmes have put in is paying dividends," said Zummack.

"We just need to go out and do the same thing the men's and women's teams did and focus on the processes and not the outcomes. If we do that we can be quite successful.

"We want to give consistent performances every day and work on the key areas we have been focusing on - our technical execution, managing the game tactics and also looking at team dynamics.

"Four of the squad played in the arena last year at the World Championships, so we feel comfortable there - we know the ice, we know the locker rooms, we know the stones and we know the facility. It is just the park we need to get used to."

Wheelchair curling is appearing at only its third Paralympic Games. In Turin in 2006, Britain came agonisingly close to winning gold only for skip Frank Duffy to make an error with the last stone of the match and hand Canada a 7-4 victory.

Four years later in Vancouver, GB came to the tournament with high hopes but won just three of their nine round-robin games and failed to make the top four.

Since then the team, representing Scotland, have won silver at the 2011 Worlds and were sixth at the 2013 event in Sochi.

Zummack, whose team have been hit by the withdrawal from the squad of Tom Killin because of illness, is full of praise for Neilson.

"Aileen is very tactically aware and has worked very hard on that aspect of her game with me," he said. "Technically she is very strong and hopefully she can go to Sochi and do what she needs to do and focus on the business in hand."