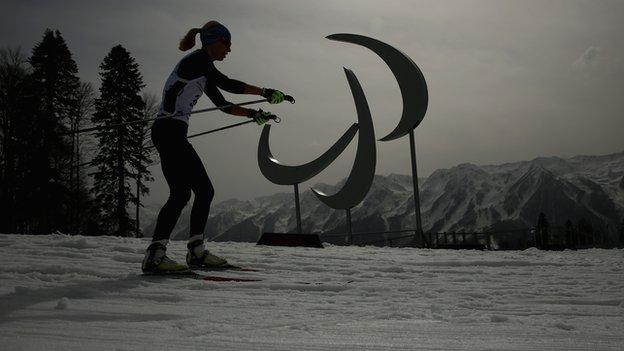 Russia will welcome the sporting world back to Sochi on Friday for the Winter Paralympics opening ceremony.

Less than two weeks after the Winter Olympics ended, 547 athletes from 45 countries will compete for 72 gold medals in five sports over 10 days.

It is the largest number of countries to take part in the event since it was first held in 1976.

The Games, opened by Russian president Vladimir Putin, will begin amid an escalating political crisis in Ukraine.

A number of the world's politicians have said they will snub the showpiece event following Russian intervention in Crimea, situated just 300 miles from Sochi.

Prime Minister David Cameron said it would be wrong for British ministers to attend the Games - a decision criticised by International Paralympic Committee president Sir Philip Craven - while ParalympicsGB patron Prince Edward has also decided not to travel.

Ukraine had contemplated a boycott of the event but on Friday, the Ukraine Paralympic Committee president Valeriy Suskevich confirmed that their 23-strong team would take part.

The opening ceremony at the Fisht Stadium gets underway at 16:00 GMT with action due to get start on Saturday.

Britain have sent a 15-strong team to Sochi as they attempt to win their first Winter Paralympic gold medal.

Set a target of between two and six medals by UK Sport, Britons will compete in alpine skiing and wheelchair curling.

The team includes 15-year-old skier Millie Knight, who will carry the flag at the opening ceremony and is Britain's youngest-ever Winter Paralympian.

Angie Malone, who was part of that team, is a reserve this time around.

The curlers, led by skip Aileen Neilson, will attempt to emulate the success of Britain's men and women teams at the Winter Olympics, where they won silver and bronze respectively.

On the slopes, British medal hopes are led by visually-impaired skiers Kelly Gallagher and Jade Etherington.

The pair, who compete in several events, will be accompanied down the slopes at Rosa Khutor at speeds of more than 50mph by their sighted guides, Charlotte Evans and Caroline Powell, who issue instructions via headsets.

"All I can see on the slope is Charlotte's orange fluorescent bib, so I follow that and hope it all goes well," said Gallagher, who won four medals at last year's World Championships and claimed three golds at a recent World Cup event in Canada.

However, Powell wears dark-coloured clothing to contrast with the snow, so Etherington can get a sense of where she is going on the slope.

The duo have formed a strong partnership over the past 12 months, winning a number of World Cup and Europa Cup medals.

A lack of snow and mild temperatures have raised concerns about conditions in the mountains.

Former British soldier Mick Brennan will not compete in Saturday's downhill after describing conditions as "scary."

GB Chef de Mission Penny Briscoe believes that the Games provide a big opportunity for the Great Britain team to build on the success of London 2012.

"We are going out to maximise the chance it presents and get the athletes to deliver when it matters most," she told BBC Sport.

"No stone has been left unturned in terms of preparation and we know that what we have done will help everyone to thrive in the atmosphere of the Games environment."

Brazil, Turkey and Uzbekistan will take part in a Winter Paralympics for the first time.

Also making its debut is the sport of snowboard cross for athletes with lower-limb impairments.

Russia, who topped the medals table in the Winter Olympics, is aiming aim to emulate that success in the Paralympics.

Among their many medals hopes are Nordic skiers Roman Petushkov, Mikhalina Lysova and Nikolay Polukhin.

Canada are favourites for gold in both the wheelchair curling and sledge hockey, while cross-country skier Brian McKeever is hoping to add to his seven Paralympic gold medals.

American wheelchair racer Tatyana McFadden has won 10 medals at the Summer Paralympics and the Russian-born 24-year-old will attempt to add to her list of accolades when she competes in cross-country skiing and potentially the biathlon, too.

McFadden, who grew up in an orphanage before being adopted by an American woman, will be watched by her birth mother.

France's Marie Bochet has dominated the season in the alpine skiing category for standing athletes, while Dutch snowboarder Bibian Mentel-Spee is aiming to create history by winning the first gold in the event.

Craven believes that the Games can help change attitudes to disabled people in Russia.

"If you look at how the Paralympic movement has developed since the 1990s, this is a game changer and a changer for the lives of probably 10% of the Russian population," he said.