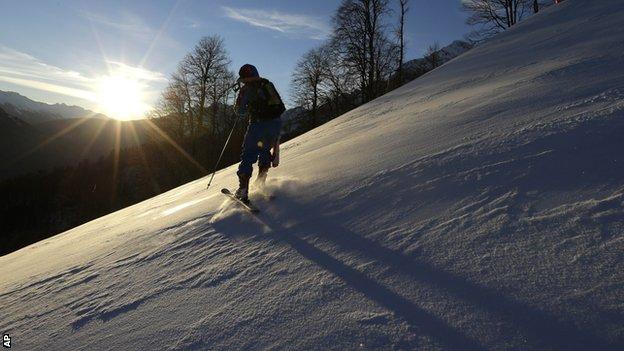 Former British soldier Mick Brennan will not compete in Saturday's downhill at the Winter Paralympics after describing conditions as "scary."

A number of skiers are concerned about the course..

But the International Paralympic Committee (IPC) insist it is safe.

Mild conditions and a lack of snow have made it soft and bumpy in places, resulting in a number of crashing in practice.

"I was skiing at about 50-60% and was still feeling a little bit scared," said Brennan, who lost his legs in 2004 following a suicide bombing in Iraq.

"It was very tricky, so I took a decision and just pulled myself from the race, but I'll still have another four (events) to come."

Mono-skier Brennan added he did not want to risk injury after only recently returning to action following nearly nine months out with a fractured sternum.

Australia's two-time medallist Cameron Rahles-Rahbula has been ruled out of the downhill event and is a doubt for the rest of the Games after fracturing his tibia in a training crash.

He added: "I've never competed in downhill conditions like this."

Although only one woman fell during the opening training session, many of the men, who took to the slopes later in the morning when it had been well used, struggled, with 18 of the 46 athletes failing to finish.

However, IPC spokesman Craig Spence insists no nations have subsequently made any formal complains or calls for changes to be made.

"There have been no safety concerns expressed by the coaches and they are the voice of the athletes," he told BBC Sport.

"The lack of snow isn't anything to do with today's injuries. The skiers who have sustained injuries today are not regular downhill skiers, they are more used to the technical events [like slalom]."

With temperatures reaching 15C at some points over the last week, mountain venues can no longer produce artificial snow.

Rain is predicted for the first weekend of the Games following Friday's opening ceremony.

That may help conditions on Rosa Khutor, with mountain co-ordinator Majca Ogris claiming the "snow is too dry".

Organisers are also using a chemical designed to harden snow and create the icy conditions that enable skiers to attain high speeds.