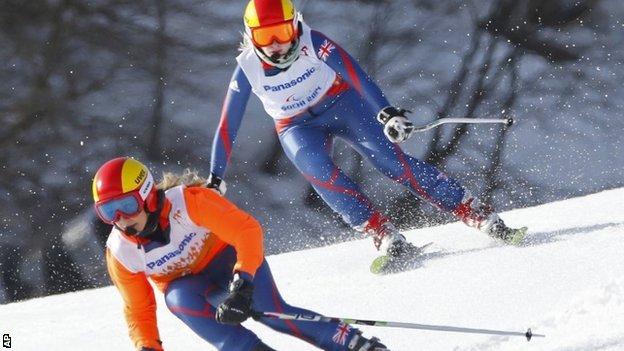 Heading down a ski slope at speeds of 100km/h is enough to terrify most people.

But imagine doing it when you can barely see where you are going.

That is the situation facing newly crowned Paralympic champion Kelly Gallagher and her team-mate Jade Etherington, who has also enjoyed medal success in Sochi, each time they line up at the starting gate.

The British pair are both visually impaired and rely on their respective guides Charlotte Evans and Caroline Powell to get them down the slopes as quickly and as safely as possible.

Evans and Powell, no mean skiers themselves, ski ahead of their athletes, giving them instructions on the course and conditions via headsets and microphones.

It means 28-year-old Gallagher and 23-year-old Etherington have to put complete trust in their guides, who in turn have to ski at a suitable distance and provide accurate technical information to maximise their pairing's chances of success.

Gallagher's eyesight problems come from a condition called oculocutaneous albinism, which affects the pigment of her skin and her vision.

"All I can see on the slope is Charlotte's orange fluorescent bib so I follow that as much as I can and listen to her commands," she said.

"We have worked so much on this relationship I wouldn't want to ski with anyone else. I really enjoy skiing with her.

"Charlotte has always had belief in us even when I falter and I haven't been performing the way I could and it is great to be able to ski with someone who has that constant belief in us as a team."

Etherington has less than 5% vision in each eye from a congenital condition called Axenfeld Syndrome and also knows that the relationship with her guide needs a lot of hard work.

Powell wears dark clothing to contrast with the snow and enable Etherington to use her limited vision to see where she is on the slope, while also communicating vociferously via the headsets.

"The key aspect for my partnership with Caroline is communication and defining our roles on and off the hill," said the Paralympic downhill silver medallist, who only started working with Powell last April.

"She has had to learn to understand when I don't need help and how much I can see with my visual impairment. We win together and lose together.

"We couldn't do it without each other and we have to have the trust and confidence in each other to talk when things go right and also when things don't go right."

But things can and do go wrong. Three years ago, when her partnership with Evans was in its fledgling stages, Gallagher was involved in a serious accident when she crashed into a rope at high speed, resulting in a shattered jaw and the pair needed help from a sports psychologist to be able to race again.

But Evans, who worked as a coach and deferred a university place before becoming a guide, admits the accident did shake her.

"It was scary because it was all in my control and it was me that had to look after her and drive her to the hospital. It made us stronger but it definitely hit us hard and we needed a lot of work after," she explained.

"Kelly has to put her full trust and safety in me and I don't think I could do [that] with anyone. I am honoured to be the one to guide her down the hill as quick as she can."