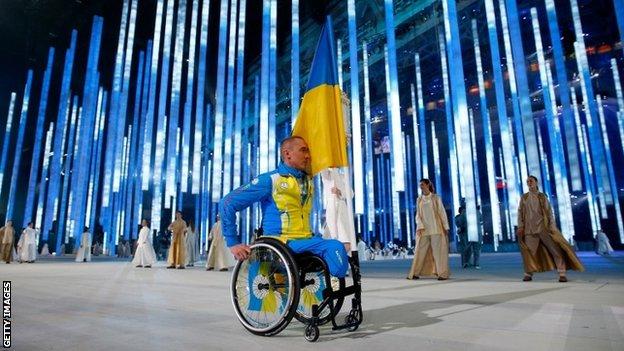 The 2014 Winter Paralympics have been opened by Russian President Vladimir Putin in a spectacular ceremony.

The ceremony at the Fisht Olympic Stadium in Sochi was themed Breaking the Ice and featured music, dance, special effects and fireworks.

"I call upon all those who experience these Games to have barrier-free minds," said International Paralympic Committee president Sir Philip Craven.

"Dreams do come true and, since winning the Games seven years ago, this part of Russia has undergone a monumental transformation.

"The Paralympics will surprise you, tremendous skills will excite you and examples of human endeavour will inspire you. The sport you witness here will change you. Not just for now, but forever."

The Ukraine team only confirmed on Friday morning they would take part in the Games after fears they would boycott the event following Russia's occupation of Crimea.

Ukraine Paralympic Committee president Valeriy Suskevich warned that any escalation of military conflict would result in the team leaving Sochi.

The Ukraine team were only represented in the athletes' parade by their flag-bearer Mykailo Tkachenko, with a number of his team-mates opting not to take part though they were elsewhere in the stadium.

The scenes of the ceremony were linked by the journey of the firebird, a mythical bird from Russian folklore said to be a symbol of wealth and happiness.

Featured performances came from 25-year-old Yulia Samoylova, the runner-up in the Russian version of the X Factor, Faktor A, who has been in a wheelchair since childhood, and blind accordionist Alexey Levchuk.

The show culminated in a huge ice scene, featuring an Icebreaker ship crashing easily through blocks of ice, before a spectacular lighting of the flame.

Sir Philip added: "If London 2012 has its Games Makers, then you the Sochi 2014 athletes, volunteers, officials and staff will be the Change Makers."

The British flag was carried by 15-year-old Mille Knight, making her Paralympic debut as the youngest member of the team, who said of the experience as: "That was the best moment of my life!

"The feeling of coming out of the tunnel is impossible to put into words. When they called out Great Britain, it made the moment real for me.

"Up until that moment, it hadn't sunk in that I was going to lead out my country onto such a huge stage, but tonight has just been amazing. I am so proud to have had this honour - only a few people can say they were a flagbearer and I'm so excited that I'm one of them.

"All my friends and family were watching at home and I just want to thank them for their support over the years."

Action starts on Saturday and runs until Sunday 16 March and the Games will feature 547 athletes from a record 45 countries, with 72 gold medals up for grabs across the five sports - biathlon, cross-country skiing, alpine skiing, ice sledge hockey and wheelchair curling.

The event is taking place less than two weeks since the Sochi Winter Olympics closed.