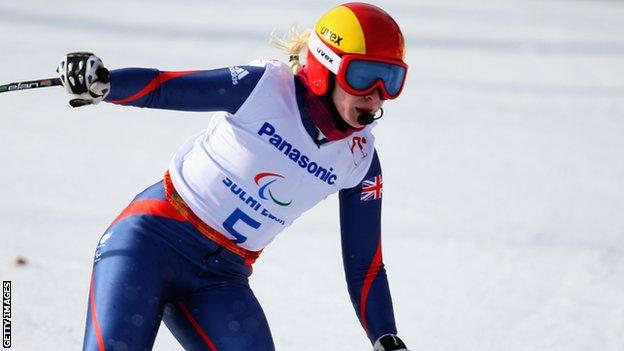 Visually-impaired skier Kelly Gallagher is aiming to make the most of four more medal chances after finishing sixth in the women's downhill in Sochi.

Gallagher, from Northern Ireland, and guide Charlotte Evans had been hoping to win Great Britain's first Paralympic medal on snow in 20 years.

Instead that honour went to Jade Etherington who took silver in the opening event on Saturday.

Gallagher's next event is the Super Giant Slalom on Monday.

Evans, who was in tears after the downhill run, said: "I am the blubbering wreck, but our communication was awesome and we have no excuse.

"You can see my disappointment, but we will come back fighting."

Gallagher paid tribute to Etherington, saying: "Jade has the guts of somebody a lot bigger than her. She is a little lady but she has got it.

"She has put her trust in Caroline and just thrown herself down those hills."