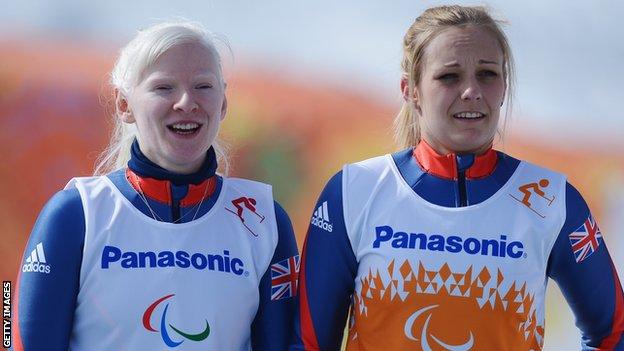 "I lost all of my faith in myself, in Charlotte, in our processes, in what we were doing," said Gallagher in Sochi.

"But we worked with Kelley Fay to get ourselves motivated again."

The duo's joy could not have been in greater contrast to the despair they felt after finishing sixth and last in the downhill event.

"It was really hard work coming from downhill into Super-G because they are similar speed events," added 28-year-old county Down woman Gallagher.

"We were told by our sports psychologist to put it away, it's one result. It's so easy to say, so hard to do.

"Charlotte said to me, 'You've got to make a decision to turn it around and forget about all the pressure that's on us' and it has worked out.

"We've had to do that so many times along the road when we have been training, whether I have been scared of something or I have been injured and physically hurt and mentally hurt."

Evans was in tears after Saturday's downhill and the most concerning aspect of the performance was not being able to figure out a reason for their surprise struggles.

Fourth in Giant Slalom at Vancouver Paralympics in 2010

"It takes a lot to make me cry, even the coach didn't really know what to do with me," added Evans.

"It was that awkward tap like, 'Come on, sort yourself out'. My eyes were sore from crying,"

"We did our best in the downhill and it didn't work, I can't tell you why. But I know that today worked."

Sports Institute of Northern Ireland performance coach Fay agreed that there had been a "lot of tears and emotion" from both athletes after Saturday's performance.

"But once your remove that emotion, it's much easier to see things rationally and then you can move on from it," added the SINI performance coach.

Fay worked with the duo in the build-up to Sochi which included sessions during the pre-games British holding camp.

"I would have spent all my time with Kelley and Charlotte both individually and together, working on different 'what if' scenarios," Fay told BBC Radio Ulster on Monday.

"So, for example, we'd look at a scenario where they had a really disappointing result in the first race, which is exactly what happened.

"But the foundation blocks of what I was doing with them was getting Kelly to trust Charlotte so she can have that confidence that she is being taken on the right road.

"Early on, it was all about building their relationship and clarifying their roles and building up that trust and rapport."

Gallagher, who has oculocutaneous albinism, a condition with affects the pigment in her hair, skin and eyes, started skiing for the first time when she was 17 on a trip to Andorra and began working with Evans, from Kent, in late 2010, just months after finishing fourth in the Giant Slalom at the Vancouver Games with previous guide Claire Robb.

The pair communicate on their way down the slopes via bluetooth headsets as they travel at speeds of up to 100km/h.

Since linking up together, they have won silver and bronze medals in the 2011 and 2013 World Championships as well as World Cup honours.

Britain has had athletes competing in every Winter Paralympics since the first event in 1976 in Sweden and the three medals won so far surpasses the minimum target of two set by UK Sport ahead of the event.