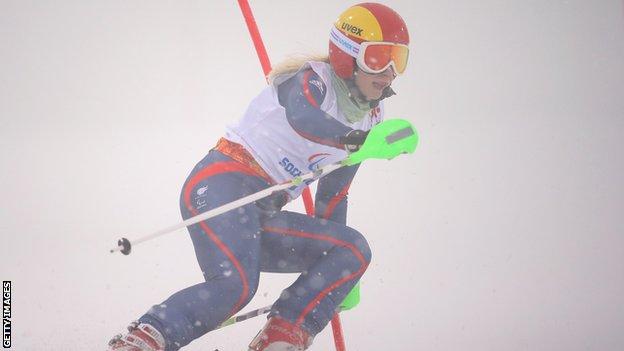 Bangor skier Kelly Gallagher said she was "upset" after a second early exit in as many days prevented her from adding another medal to her Super-G Winter Paralympics gold from Monday.

Gallagher crashed out four gates from the finish of their first run in the slalom as she and guide Charlotte Evans looked set to move into the lead.

"We are going to have to try and get over the last two days," said Gallagher, 28.

"It's tough but we must deal with it."

The conditions are nothing to do with our run. It's solely us

Gallagher and Evans had to watch the second run from the sidelines as their British team-mate Jade Etherington and guide Caroline Powell won their third medal of the Games as they took silver.

After the joy of Monday's triumph, the Northern Irishman woman and Evans have had to face very different emotions over the last two days.

Gallagher also hit a gate in the slalom stage of the super combined on Tuesday just as they appeared to post another fast time.

"You are getting too much emotion from me," Gallagher told BBC Sport after Wednesday's disappointment.

"Today I am upset about it."

The realisation that the British duo looked set to move into the lead before their premature exit only added to Gallagher's frustration.

"I love slalom and it felt really good. I was at the start gate and really excited to be racing with Charlotte. We were working really well. We will have to have a little review of it now."

Gallagher and Evans now face the task of regrouping for their final event, Sunday's giant slalom, but the Northern Irishwoman acknowledged that they will have plenty to mull over.

"We are really disappointed. We trained four seasons for this and we've worked really, really hard and have been through so much.

"So I am a little confused why it hasn't gone our way in the past two days.

"If it was any other race, you wouldn't do so down about it but today feels a little bit harder.

"It hurts in your tummy...hurts everywhere."

Gallagher's guide Evans refused to use the conditions as an excuse for Wednesday's exit.

Snow fell for the first time during the Games and unlike other days, visibility did not appear perfect on on the Rosa Khutor Alpine Centre.

"To be honest, it was perfect for us. We had good conditions," said Evans.

"The slope is awesome and it's rock solid underneath. The conditions are nothing to do with our run. It's solely us."