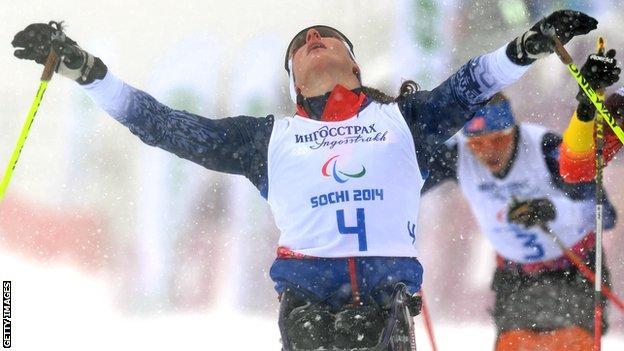 McFadden came within 0.1 seconds of winning the 1km cross-country sprint on Wednesday but the 24-year-old, who is better known for her wheelchair racing, was pipped to the line by Norway's Mariann Marthinsen in the sit-ski event.

McFadden has won wheelchair races all over the world, but her desire to compete in Russia - the country of her birth - led her to take up a completely new sport.

Her silver medal in Sochi is the 11th she has won at a Paralympics - but her first from a Winter Games.

Speaking after narrowly missing out on gold, she said: "The most important part is just having my family here. It's definitely a fulfilling moment."

That family is American and Russian. First, there is the woman who adopted her from a St Petersburg orphanage, Deborah McFadden, who fell in love with the little girl she met when she was distributing foreign aid for the US government.

But there is also her birth mother Nina Polevikova, who was convinced that giving her baby - who had been born with part of her spine outside her body - over to an orphanage was the child's best chance at life.

In recent years, Tatyana has sought her out and has paid for her, and other members of her Russian family, to travel to experience these Games in Sochi.

Tatyana used the money she won from last year's four marathon victories to fund their trip so they could see her racing live for the first time.

As she puts it, her biological mother "gave her life" twice - once by giving birth to her and then by signing the papers that allowed her to be adopted.

Deborah was fighting back tears as she celebrated following the sit-ski event, while at the same time reliving the uncertainties of the past.

"I'm thinking of today and actually what could have been," she said.

"I cried when she crossed the finish line. I think back to this little girl in an orphanage. She's come back to the place where she was and she wanted to invite the people who saved her life."

Deborah says the two mothers, who are both enjoying Tatyana's success, are getting on well.

"In some ways, she really had no choice [of giving Tatyana over to an orphanage]," said Deborah. "There wasn't the medical treatment. She did what the doctors told her."

As far as Deborah is concerned, that decision was the right one.

"By being not selfish, to not say 'let me keep this child with me for as long as I can until she dies', gave her the best chance at a life."